As we celebrate Memorial Day, I thought that readers may find the following story of interest.  After the Civil War, communities around the country began annual observances to honor Union war dead or to mark the end of the war.  This tradition became more formalized in May 1868, when John Logan, a former Union general and then commander of the Grand Army of the Republic, a Northern veterans' group, issued a proclamation setting aside May 30, 1868 as a day "for the purpose of strewing with flowers or decorating the graves of comrades who died in defense of their country during the late rebellion, and whose bodies now lie in almost every city, village, and hamlet church-yard in the land."  The holiday was first known as "Decoration Day."  By 1890, all Northern states officially recognized Decoration Day.  Southern states refused to join in any such commemorations and honored their dead on different days until after World War I, when the holiday was expanded to commemorate the sacrifices of soldiers and sailors in any of the nation's wars.  In 1967, federal law declared the holiday as "Memorial Day."  Today, Americans are united in their remembrance of the country's war dead, although few may recall, or even know, the Civil War-related origins of this national holiday. 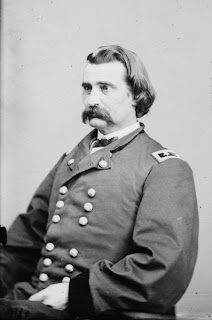