Crossing Chain Bridge, I have frequently glanced up at the expansive sky, spreading out over the river and trees below.  The view is more open than the during the Civil War, when wooden beams crossed overhead.  In1861, the skies over Chain Bridge witnessed some interesting episodes in early military aviation.

The Union and Confederate Armies both used balloons for reconnaissance purposes during the Civil War.  President Lincoln established the Balloon Corps, under the Union's Bureau of Topographical Engineers, in the summer of 1861.  Professor Thaddeus S.C. Lowe, a balloonist who had demonstrated his technology before Lincoln, was given permission to procure necessary equipment and personnel. 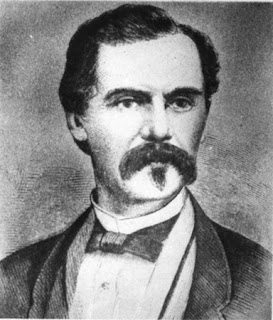 Union Brigadier General Fitz John Porter was convinced of the military value of Lowe's balloons and in September 1861, persuaded Major General George B. McClellan, commander of the Army of the Potomac, to approve a plan for aerial reconnaissance of Confederate positions in Falls Church, Virginia from a vantage point at Chain Bridge. The balloon ascended on September 10 and evidently proved its usefulness. Brigadier General William F. "Baldy" Smith, commander of the defenses around Chain Bridge, pushed for further ascensions.  On September 13, Smith himself went up with Lowe at Chain Bridge to survey Confederate troop movements across the Potomac.  Several days later, on September 24, Smith used balloon observation from a site at Fort Corcoran, near Aqueduct Bridge, to direct artillery fire on Falls Church from Smith's batteries around Chain Bridge, three miles distant.  Direction was relayed from the balloon to the artillery position by means of telegraph and signal flag.  This episode marked the first artillery fire direction with aerial observation in American history. 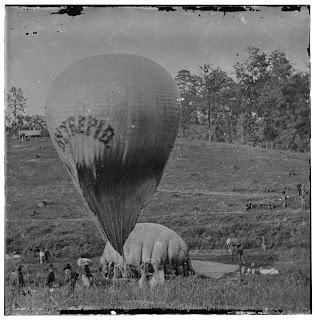 One of Lowe's balloons, the Intrepid (Library of Congress)

On October 12, 1861, Lowe was working on the construction of balloons in Philadelphia when he was asked to report to General Smith near Lewinsville, Virginia.  Arriving in Washington that same day, he was ordered to leave immediately for Smith's headquarters. With balloon in tow, Lowe and his men set out at night through the streets of Washington, trying hard not to get tangled in the telegraph wires overhead.  When they reached Chain Bridge about 3 a.m., they found the road crowded with artillery and cavalry headed to Virginia.  Rather than wait for the bridge to clear, Lowe had his men climb the trestles and mount the stringers -- only eighteen feet wide and 100 feet above the swift-moving Potomac -- where they towed the balloon over the bridge.  Lowe directed the management of the ropes.  As he described it, "the scene was novel, exciting, and not a little dangerous."

Lowe and his men were exhausted when they reached Lewinsville at dawn on the 13th, about a mile from Smith's headquarters.  Unfortunately, a strong wind began blowing, and attempts to fasten the balloon were unsuccessful.  The balloon broke free of its moorings and floated eastward all the way to Delaware, where it was found by a farmer with suspected Confederate sympathies.  Unionist neighbors prevailed over local secessionists, and the balloon was returned to the Union Army.  Surprisingly, the balloon had suffered little damage.

When crossing Chain Bridge, I can't help but think of the band of Balloon Corpsmen who struggled to get the balloon across the Potomac as they balanced on wooden beams, only to lose their precious cargo on the opposite shore a few hours later.  I wonder how Smith reacted, but we know that Lowe survived to conduct future reconnaissance missions, including during the 1862 Peninsula Campaign near Richmond.
Posted by Ron Baumgarten at 11:07 PM