Lewinsville, Langley, and the Union Army: Present-Day McLean During the Civil War, Part I


Last April I moved across Northern Virginia from Alexandria to McLean.  I knew little about local McLean history aside from the fact that President James Madison had passed through the area while fleeing the British in 1814.  Slowly, additional stories began to emerge.  On a walk one day last year, I discovered a former Union hospital just around the corner from my house.  More recently, one of my best friends, who also happens to be a neighbor, pointed out another significant local site, hidden off Route 123 behind acres of trees.  After more research, including a Sunday afternoon trip to the McLean Community Center, I pieced together the interesting role that McLean played in the early days of the Army of the Potomac.

At the time of the Civil War, the hamlets of Langley and Lewinsville and the surrounding countryside constituted what is now the area of McLean.  (Today, "Langley" has become synonymous with the CIA, whose sprawling headquarters complex is located there.) These villages were not far from the strategic crossing of the Potomac at Chain Bridge and began to see increased Union Army activity during the second half of 1861.

On September 11, 1861, Union Brigadier General William F. "Baldy" Smith sent about 2,000 soldiers from Chain Bridge to conduct reconnaissance around Lewinsville.  They clashed with over 300 Confederate troops under the command of then-Colonel James Ewell Brown "Jeb" Stuart, who would become one of the Confederacy's most famous cavalry leaders.  Heavy artillery dueling ensued as the Union force fell back towards Washington. Both sides claimed victory, and casualties were light.  Only two soldiers, both Northern, died in the battle.

On September 25, a Union force of around 5,000 set off for Lewinsville as part of a foraging and reconnaissance expedition.  They encountered Confederate troops that had advanced from Falls Church. After an intense exchange of artillery fire, the Rebels pulled back from Lewinsville. 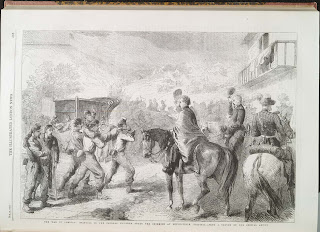 "Bringing in the Federal Wounded after the Skirmish at Lewinsville, Virginia -- From a Sketch by Our Special Artist," The Illustrated London News, October 12, 1861 (Emory University online collection)

Unfortunately, there is little written about these skirmishes.  The absence of historical markers interpreting the battles at Lewinsville is also a noteworthy oversight in a region located along Northern Virginia's Civil War Trails.  At some point in the future, I hope to have a more detailed post dedicated to these military actions, once I find the time to get to local libraries and archives!  I would also like to see if we can't get a marker or two placed in McLean along the Civil War Trails. 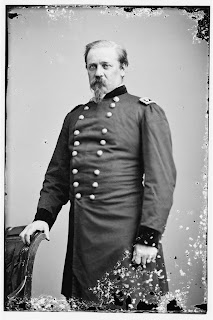 As noted in a previous post, "Baldy" Smith sent soldiers from his division across Chain Bridge on the night of September 3-4.  These troops began construction of Fort Marcy, just east of Langley.  Smith's troops finally seized Lewinsville on October 9, 1861.  Major General George McClellan's Report on the Organization and Campaigns of the Army of the Potomac notes that as of October 15, Smith's division was posted at Mackall's Hill (between Langley and Lewinsville), while Brigadier George A. McCall's division was situated at Langley.  Before long, Union soldiers established encampments in the fields and woods around present-day McLean.  Eventually, 20,000 troops would be quartered across a five-mile area stretching from Langley to Lewinsville during the October 1861 to March 1862 time frame.  Many of these soldiers would be organized into the IV Corps of the Army of the Potomac and sent farther south as part of the Peninsula Campaign in the spring of 1862.

I plan to explore additional aspects of McLean's Civil War history in future posts.  I would like to get out my camera and take some photos of sites near my home this weekend.  Here's to hoping my neighbors don't call the police on me!  Coming next, "Tenting Tonight on the Old Campground: Present-Day McLean During the Civil War, Part II."

After additional research in connection with subsequent entries, the section on the military actions at Lewinsville has been revised.  For additional information, see here.

Posted by Ron Baumgarten at 8:59 PM