Chain Bridge seems to be the location that keeps on giving.  Who knew that a bridge could hold so many stories about the Civil War?  As mentioned in my first post on the subject, Chain Bridge saw no real action during the Civil War.  However, at various times throughout the conflict, concerns about a possible Confederate threat to the nation's capital loomed large, and the garrison at Chain Bridge got caught up in events.  One of the most notable episodes occurred in August 1862 during the Second Manassas Campaign.

After General McClellan's failed Peninsula Campaign in the spring and summer of 1862, the Army of the Potomac was ordered to move off the Virginia Peninsula and closer to Washington.  McClellan objected, but to no avail.  The Federal general certainly did not relish the prospect of helping the newly-formed Army of Virginia under Major General John Pope, a pompous general brought East from the Western theater.  By the time McClellan got his army moving towards Washington in mid-August,  General Robert E. Lee's Army of Northern Virginia was moving to destroy the Army of Virginia before McClellan could provide reinforcements. When McClellan arrived in Alexandria on August 26, two of his army corps (the Third and Fifth) were on their way to Pope.  The Sixth Corps under Major General William B. Franklin had just arrived, and the Second Corps under Major General Edwin V. Sumner would disembark in Alexandria a couple of days later. McClellan, who stepped into an ill-defined command situation, began to bicker with General-in-Chief Henry W. Halleck over control of his two remaining corps. 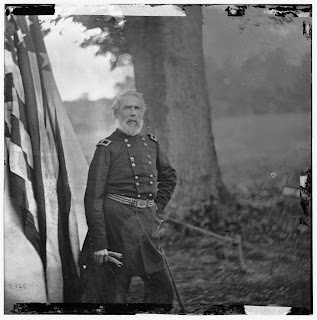 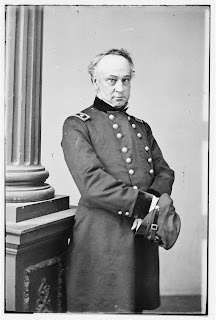 Chain Bridge soon became the focus of attention.  On August 28, McClellan informed Halleck that various sources reported that "the enemy with 120,000 men intend advancing on the forts near Arlington and Chain Bridge, with a view of attacking Washington & Baltimore."  As McClellan confirmed in a subsequent letter to his wife, "there was a terrible scare in Washington" that night when "[a] rumor got out that Lee was advancing rapidly on the Chain Bridge with 150,000 men....I did not get 5 minutes consecutive sleep all night--so thick were the telegrams!"  McClellan, always cautious and inclined to imagine worst case scenarios, believed that Lee might be trying to get his army between Pope and Washington.  He made the defense of the capital his top priority.  Pope would have to wait for the Second and Sixth Corps. 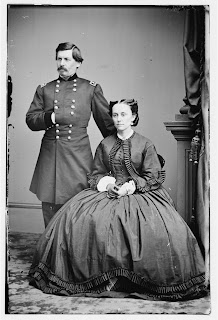 General McClellan and his wife, Mary Ellen (Library of Congress)

Early on the morning of August 29, McClellan reacted to the alleged Confederate advance.  He ordered two regiments and an artillery battery from the Second Corps to march to the vicinity of Chain Bridge on the Virginia side.  By the morning of August 30, three of Sumner's brigades were on both sides of Chain Bridge, and the rest of his corps was in Arlington, including the area around Fort Corcoran.  Lee and Pope, however, were engaged in a ferocious fight around the old battlefield of Bull Run.  Around 2 pm, Halleck ordered Sumner's entire corps, along with the Sixth Corps, to be "pushed forward with all possible dispatch" to the front.  The threat to Washington by way of Chain Bridge had just been as McClellan described it -- a mere "rumor."  Unfortunately for the Union Army, the remainder of McClellan's army was too late to make any difference.  Lee's army soundly defeated Pope's forces and would soon launch an invasion of Maryland.

I am impressed by your ability to continue churning out posts while otherwise occupied! (jk)

Well, guess I am a pretty productive person! And you do need a distraction or two. (It helpd that I did research and wrote some posts before the boys were born.) I will keep posting weekly for now, more or less, and pick it up when things are less hectic!