Frank Leslie's and a View of the Area Near Chain Bridge

Part of my Civil War hobby involves collecting Civil War era books and newspapers. I have found that newspapers in particular are an affordable way to own an actual piece of Civil War history. Some relatively well-preserved editions can be purchased for as little as $40, which isn't bad when considering how old they are. A short while ago, I decided it was time to take a look again at what was available on eBay. Unable to resist, I ended up purchasing a January 18, 1862 copy of Frank Leslie's Illustrated Newspaper.


This edition of Frank Leslie's may strike readers as covering a relatively quiet period in the war out East. There is a brief discussion of the Confederate movement on Dam No. 5 on the Potomac, but other than that, not much of significance had happened. Out West, things were a little more active, and the paper takes a look at Gen. Don Carlos Buell's movements in Kentucky. (The Battle of Mill Springs would actually take place the day following the publication of the paper.)

Sure, I could have purchased editions of Harper's Weekly or Frank Leslie's from far sexier times.  But the main reason I bought the paper has to do with the following illustration: 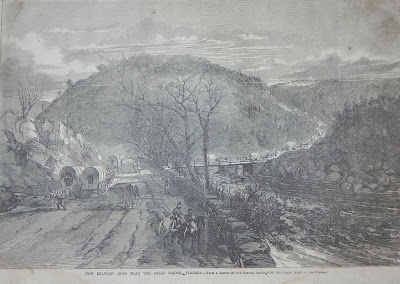 The title of the lithograph is "New Military Road Near the Chain Bridge, Virginia," based on a sketch by the newspaper's "special artist with the Grand Army of the Potomac." (Click image for a larger view.) The illustration depicts a Federal wagon train descending the Leesburg & Georgetown Turnpike (today's Chain Bridge Road/VA-123). Chain Bridge is off to the left at the bottom of the hill and not depicted here. Ft. Marcy was located not far uphill from the site of the engraving. The new Military Road, which led to Ft. Ethan Allen, veers to the right at the bottom of the hill and crosses over Pimmit Run. The scenery looks today very much like it did then. I'd insert a modern shot, but the late summer foliage is still too thick to make a good comparison. A contemporary map of the area can be found here.

I had seen a few reproductions of this image in books and am now glad to be the owner of an original copy.  I cross over this very ground on my way to Chain Bridge every weekday morning.  This lithograph carries me back to a time when the roads around Northern Virginia served as vital transportation networks for the Union Army.  And it reminds all of us that what may now be mundane commuter roads were once worthy of national attention.
Posted by Ron Baumgarten at 9:44 PM

This really is a beautiful view. When people ask me random questions after I tell them I have a degree in history I try and explain to them what history really is. You have depicted my view of it fully. It is the single person that actually lived, the moments in time that happened in a place that still exists. Thank you.

You are welcome. It is images such as the one above that really capture history for me. When I think of this lithograph as I pass over the very same ground on the way to work, I truly feel connected with a time and place of long ago.