Last year I began to collect Civil War-era newspapers.  Not surprisingly, I have focused on papers that cover events in and around Northern Virginia and Washington.  I am particularly interested in newspapers that feature lesser-known aspects of the conflict in my neck of the woods.  These editions also tend to be cheaper than the papers that discuss the larger battles, like Second Manassas or Gettysburg.  Given the presence of on-line sellers such as eBay and Timothy Hughes, collecting old newspapers has never been easier.

I had my eye for quite some time on an October 12, 1861 edition of The Illustrated London News that contains one of the few, if only, contemporary engravings related to the September 11, 1861 Battle of Lewinsville.  Imagine my delight when I finally located an original copy on the eBay store, librariavitae.   The price also suited my fancy, and I quickly placed my order. 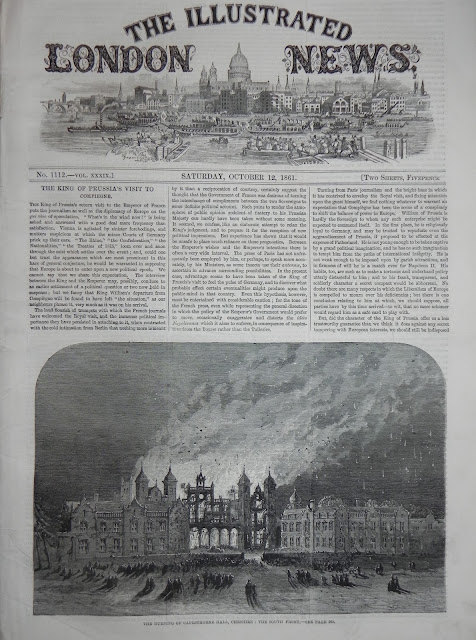 An entire page is dedicated to the engraving, which is entitled, The War in America: Bringing in the Federal Wounded After the Skirmish at Lewinsville, Virginia.  Based on commentary from the paper's special artist dated September 23, 1861, I've confirmed that the Lewinsville engraving depicts a scene following the September 11 engagement, and not the September 25 skirmish at the same location. 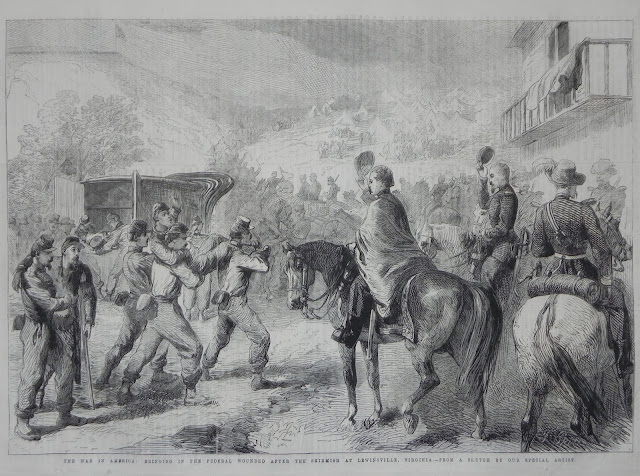 The text accompanying the illustration states:


Just as the wounded were being brought in General [George B.] M'Clellan reached the ground with an Aide-de-Camp and an escort of dragoons. He raised his hat as each poor fellow was borne from the ambulance to the hospital; and many whose eyes were fast glazing in death raised themselves in the arms of those who bore them and smiled a last smile at their young and beloved General.

As I've learned during the course of my research on Lewinsville, McClellan indeed greeted the Federal column returning from the skirmish.  (See, e.g., Hazard Stevens, The Life of Isaac Ingalls Stevens, Vol. II, p. 332 (1900)). However, The Illustrated London News added a touch of melodrama.  Only three Union soldiers died in the engagement, and they appear to have been killed on the spot.  (OR, 1:5, 173, 177, 180.)  The wounded were brought back to camp, but they were not on the verge of death as the paper wanted readers to believe.

Presumably the scene was sketched close to Camp Advance, where the Union force returned from Lewinsville following the engagement.  Tents are clearly visible to center of the engraving, above Little Mac's head.  A defensive work appears to crown the hilltop to the upper left.  Ft. Marcy dominated the area around Camp Advance, but would have sat to the south of the road from Lewinsville, or to the right of the engraving.  The picture may depict Ft. Ethan Allen, which sat to the left of a road leading away from Ft. Marcy and Lewinsville.  (See map here.)  A few of the regiments involved at Lewinsville, including the 2nd Vermont, 19th Indiana, and 79th New York, helped to build Ft. Ethan Allen and were stationed nearby.  (See Benjamin Franklin Cooling III & Walton H. Owen II, Mr. Lincoln's Forts: A Guide to the Civil War Defenses of Washington (2010 ed.)).

The newspaper also contains an engraving entitled, The War in America: The Chain-Bridge Across the Potomac Above Georgetown, Looking Towards the Virginian Shore. 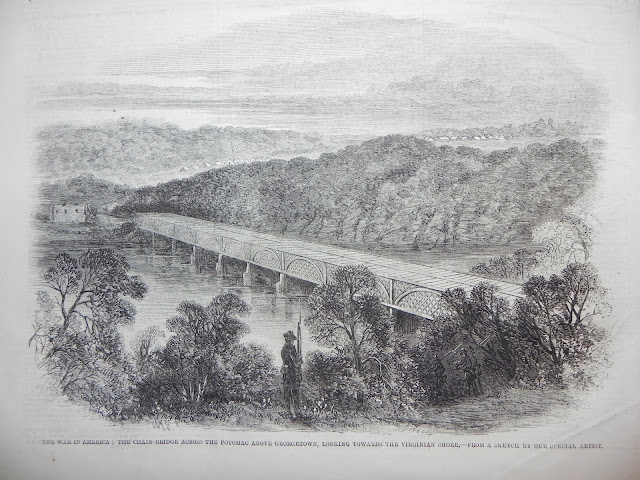 
The two great armies still stand at bay on the lines of the Potomac, and the chain-bridge across that river, above Georgetown, of which an Illustration by our Special Artist is given below, is a position of great interest just now, as the Confederates are continually making threatening movements in the neighbourhood, either with the intention of destroying the bridge or of crossing by it into Maryland. On the heights on the Virginian shore are seen the tents of the Federal advance, which throws out pickets to a distance of two miles beyond. The Maryland end of the bridge is commanded by an upper and a lower battery, both of them very strong positions.

I really like this engraving, which offers a spectacular view of Chain Bridge and the Virginia side of the river. The tents apparently mark the location of Camp Advance, which was established at the start of September 1861 by men under Union Gen. William F. "Baldy" Smith.  I am continually looking for information on the exact location of Camp Advance, and this engraving sheds further light on where Smith's men gained a toehold in the Old Dominion.  The accompanying text also references Confederate actions around Chain Bridge.  I've read about encounters between Confederate and Union pickets in the vicinity of the bridge during the fall of 1861, but am not familiar with Confederate plans to destroy the bridge or attempt a crossing in front of two batteries and countless Federal infantrymen.  I'll need to dig a little deeper on these early picket wars.

I really treasure owning this newspaper given its connections to local Civil War history.  I am reminded that what was happening in the present-day suburbs of DC once captured the world's attention.  Even a small engagement like Lewinsville made the London papers in the days before bigger battles like Antietam and Shiloh.  And a simple wooden bridge to Virginia held strategic significance that foreign editors could not deny.
Posted by Ron Baumgarten at 6:11 AM