Publishing companies often contact Civil War bloggers to review their latest and greatest works on the nation's bloodiest conflict.  I enjoy seeing what's new in the world of Civil War publishing and welcome the opportunity to get the most recent releases.  And who am I to turn down a free book?  Of course, the books come with strings attached since I am supposed to write a review or at least spread the word.  Given how busy I am outside of my Civil War pursuits, I barely have enough time to read the books that I buy, let alone receive on a complimentary basis.  That being said, when I get a noteworthy book from a publisher, I like to follow through and write a review.  In today's post, I take a long overdue look at a couple of books that publishers have sent my way.

The Library of Congress Illustrated Timeline of the Civil War by Margaret E. Wagner, Little, Brown and Company (2011): I'll admit it. I am a sucker for so-called coffee table books. As an avid bibliophile, I like to acquire, admire, and display attractive books. My collection naturally focuses on the Civil War. From the moment I received the The Library of Congress Illustrated Timeline of the Civil War, I was hooked. The richly illustrated book, which marches through the war on an almost daily basis, draws from the extensive archives at the Library of Congress. More than a mere recitation of the war's chronology, the book offers a visual feast on each and every page. The author has chosen a striking array of photographs, engravings, maps, drawings, and other illustrations. Readers will find the usual suspects, but the book also contains a myriad of rare and previously unpublished images. The text, although necessarily concise, also benefits from a thoughtful use of quotations from primary source documents. 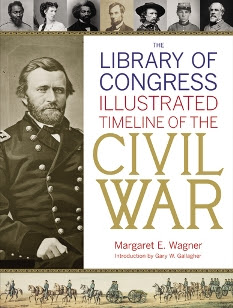 E.B. Long's classic work, The Civil War Day by Day, presents a more comprehensive, in-depth chronology of the war than the Library of Congress book.  Wagner sometimes overlooks events, including aspects of the war in Northern Virginia during the second half of 1861 and the start of 1862.  Her book also skips entire days.  But the Illustrated Timeline of the Civil War more than compensates for these shortcomings with the quality of the writing and illustrations.  Long's massive book, although more detailed and better suited to research, is less captivating by comparison.  The Illustrated Timeline of the Civil War is the kind of book to browse through casually and enjoy.  Think of it as a printed companion to the Sesquicentennial, particularly for those with less knowledge on the history of the war.  All told, The Library of Congress Illustrated Timeline of the Civil War is a valuable, and handsome, addition to the world of Civil War reference books.  And it doesn't look bad on a coffee table either.

The Iron Way: Railroads, the Civil War, and the Making of Modern America by William G. Thomas, Yale University Press (2011):  This year I promised myself that I would read more about the economic and social history of the Civil War.  Being a bit of a train buff, I also wanted to dig a little deeper into the subject of railroads and the war.  The Iron Way was a perfect place to start.  William G. Thomas, a professor at the University of Nebraska-Lincoln, offers a sweeping and ground-breaking examination of railroads before, during, and after the Civil War.  He combines strong scholarship with a thoroughly readable style.  The book, incidentally, is paired with an excellent digital history project, Railroads and the Making of Modern America.

Thomas shows just how critical railroads were to regional identities in the antebellum period and dispels old myths about the South as an economic backwater. In fact, the region was building and expanding railroad networks at a rapid pace during the 1850s. Rail penetration continued to grow and in many instances approached the level in the Northern states. Thomas explains just how intimately connected slavery was to this spectacular development. Companies bought and rented slaves to help construct and maintain railroads. Ironically, the technological progress brought by the railroads also ensured the very survival and perpetuation of the peculiar institution. So much for the argument that modernization would lead to the demise of slavery. Meanwhile, the North's own views about free labor and the advance of American civilization were tied up with the expansion of the railroads to the West. 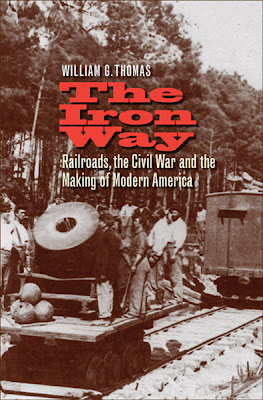 As the war descended on the country, railroads naturally played a pivotal role.  They transported troops and moved supplies.  But the railroads also served as avenues of destruction and violence.  Thomas explores the growth of irregular warfare along the rail corridors throughout the South as men like John Mosby and John Morgan targeted Union supply lines and the soldiers protecting them.  This fighting became increasingly brutal and contributed to the ruin of the very rail infrastructure that the South had built before the war.  Thomas's interpretation is a valuable addition to the current body of scholarship on guerrilla warfare as popularized in Donald Sutherland's A Savage Conflict.

Thomas also focuses on the evolution in strategic thinking about the railroads.  Both sides had to figure out how to assimilate the new technology and create what Thomas calls a "railroad generalship."  George B. McClellan, however unfairly, is singled out for his failure to grasp the importance of railroads during his 1862 Peninsula Campaign.  By contrast, Stonewall Jackson ranks among the military leaders who clearly understood the role that railroads could play in winning the war.

Thomas reserves his highest praise for William T. Sherman, who mastered the art of railroad generalship.  The greater part of an entire chapter examines how Sherman incorporated the railroad into his campaign to take Atlanta and beyond.  As Thomas writes, "[t]he maneuvers were carefully planned reconfigurations of the southern landscape, aimed at crippling railroad networks and severing southern communities from one another."  (p. 157.)  The March to the Sea, moreover, "was another, even more elaborate maneuver to control the Confederacy's network of railroads."  (p. 158.)  The Union's successful application of railroad generalship resulted in the destruction of track, bridges, and other infrastructure throughout the South.  Ironically enough -- in a book filled with irony -- the Union military in Georgia and elsewhere helped to put the railroads back together again during and after the war.

Thomas shows convincingly that the railroads also played a key part in the African-American struggle for emancipation and civil rights.  Before the war even started, fugitive slaves like Frederick Douglas were riding the rails northward to freedom.  During the war, contrabands flocked to the Union lines around railroad centers.  Here the escaped slaves could find work on the rails or enlist in the Union Army.  In the post-war South, racists sought to undermine black advances and imposed segregation on the railroads.  Thomas tells the story of a brave African-American wash woman, Catherine Brown, who successfully challenged such segregation in court, but her story was the exception and not the rule.

The Iron Way amazingly covers a lot of ground in only 274 pages of text and endnotes. If you are looking for a purely military study on railroad strategy and tactics in the Civil War, or a history of the U.S. Military Railroads, Thomas's book is not the one for you.  However, for those readers seeking a comprehensive account of the social, economic, and military importance of railroads in the Civil War era, Thomas has put together a definitive work that will set a standard for years to come.
Posted by Ron Baumgarten at 6:15 AM

I wish I had the problem of publishers wanting ME to read their book offerings. The Iron Way sounds interesting and I will have to add it to my wish list!

That is a blessing and a curse, particularly if your wife already says you have too many Civil War books! I am almost caught up--"Cain at Gettysburg" is next on the list. I think you will find "The Iron Way" to be an excellent book. Let me know what you think.