Today I'd like to talk about a few books that publishers have sent my way. They are all worth a spot on your Civil War bookshelf, even if you are running out of room like I am! And each one is the type of book you can spend hours perusing, which is a perfect indoor pursuit for all of these cold winter days.

Smithsonian Civil War: Inside the National Collection, Neil Kagan & Stephen G. Hyslop (eds.) (Smithsonian 2013): Take one look at Smithsonian Civil War and you will quickly see that the art of bookmaking is alive and well. This handsome publication contains 150 entries on Civil War-era topics ranging from Bleeding Kansas to Abraham Lincoln's assassination. (And that number is not coincidental -- Smithsonian Civil War is intended as a publication in honor of the Sesquicentennial.) Curators have thoughtfully selected over 500 objects from the Smithsonian's collections and built a concise yet informative narrative around them. Some items, such as Alexander Gardner's "A Harvest of Death," will appear very familiar to readers. Others, like Confederate postage stamps or Thaddeus Lowe's binoculars, are somewhat obscure, but just as captivating in their own right. I particularly enjoyed the full-color spreads of original uniforms, weapons, and accouterments, including militia headgear, Confederate belt buckles, side arms, and Zouave jackets. Owning this beautiful coffee table book is like having a private Civil War museum at your fingertips. Thanks to the good people at Smithsonian, we now have another worthwhile souvenir of the Sesquicentennial years. 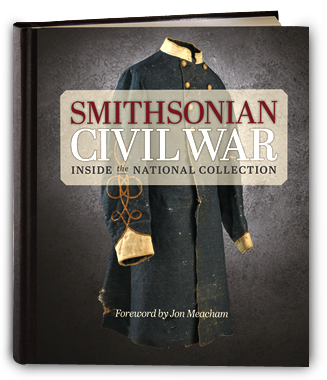 The Civil War in 50 Objects, by Harold Holtzer & the New-York Historical Society (Viking 2013): Although not as heavily illustrated as the Smithsonian book, The Civil War in 50 Objects is another fascinating look at the war as told through artifacts. This time we are treated to a selection of paintings, photographs, uniforms, flags, letters, diaries, broadsides, and other seldom-seen items from the New-York Historical Society's impressive Civil War collection, which dates to the immediate post-war period. Each chapter explores a select object and related theme. A Bible from the Colored Orphan Asylum, burned during the New York City Draft Riots, brings the horror and racism of that tragic event to life. A Confederate soldier's watercolor drawing from Point Lookout takes readers behind the prison gates. These rare artifacts, and forty-eight others, paint an unforgettable and sometimes intimate portrait of a country at war. Not quite a coffee table book, The Civil War in 50 Objects is a unique visual history lesson with broad appeal to beginners and experts alike. I only wish they could have chosen 100 more objects to join those 50 in honor of the Sesquicentennial! 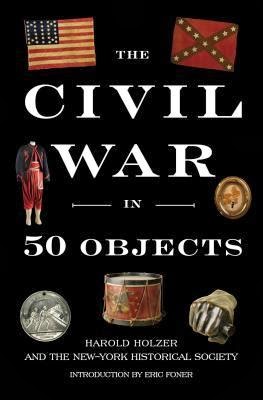 The Maps of the Bristoe Station and Mine Run Campaigns: An Atlas of the Battles and Movements in the Eastern Theater after Gettysburg, Including Rappahannock Station, Kelly's Ford, and Morton's Ford, July 1863-February 1864, by Bradley M. Gottfried (Savas Beatie 2013): As students of military history know, maps are critical to a full understanding and appreciation of events. Lucky for us, Savas Beatie has published yet another excellent battle and campaign atlas. I already have Gottfried's atlases for First Bull Run, Antietam, and Gettysburg. (Savas Beatie also published a Chickamauga atlas by David Powell.) The decision to focus on Bristoe Station and Mine Run may seem like an odd choice at first glance. But writers have neglected events in the Eastern Theater between Gettysburg and the Overland Campaign for far too long, making this atlas a welcome and much-needed addition to the Civil War literature. Readers of the other atlases will find the format familiar. Gottfried has assembled thirteen map sets, translating into 87 full-page color maps in all. Thirteen maps alone cover the November 27, 1863 fighting at Payne's Farm during the Mine Run Campaign. The page opposite each map describes the corresponding action in detail, along with useful endnotes. I had never spent that much time studying the long interlude before U.S. Grant's appearance in the East. The Maps of the Bristoe Station and Mine Run Campaigns is sure to change all of that. 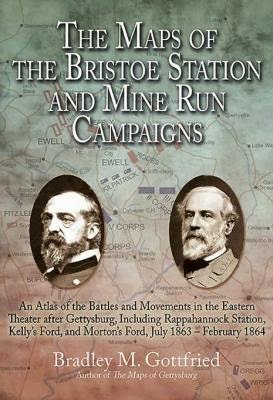 Posted by Ron Baumgarten at 6:22 AM

Thank you for mentioning The Maps of the Bristoe Station and Mine Run Campaigns by Bradley M. Gottfried! You can read more about the book and author at publisher Savas Beatie's site here: http://tinyurl.com/n9mx5jq (including excerpts and author interviews!).

Author Bradley M. Gottfried is also working on a new book, The Maps of the Wilderness Campaign. You can read Gottfried's blog post about his upcoming book here: http://bradleygottfried.com/2014/01/30/183

You are welcome! Great book! And I am looking forward to the Maps of the Wilderness Campaign. (So readers know, the above links don't seem to work by clicking; so just cut and paste into your browser and that should take you to the link.)