Some Updates Related to Family History

Last year I discovered that I had a family relationship to Pvt. William Baumgarten of Company K, 102nd Pennsylvania Veteran Volunteers. (See here for the story.) My exact connection is unknown at this time, and I am still searching for more information to complete the story. I hope that this new year brings additional discoveries in my quest to learn more about William.

While researching William's Civil War service, I came across John H. Niebaum's History of the Pittsburgh Washington Infantry: 102nd (Old 13th) Regiment Pennsylvania Veteran Volunteers and Its Forebears, 1792 to 1930, published in 1931. The book tells the story of the 102nd Pennsylvania and its predecessors, including the Pittsburgh Blues (War of 1812), and the Jackson Independent Infantry (Mexican War). The Washington Infantry itself was established in 1855. Not surprisingly, a large section of the book is dedicated to the story of the regiment during the Civil War. The unit initially organized for three months' service in 1861 as the 13th Pennsylvania Volunteers. In August 1861, members of the 13th raised a new three-year regiment, which was mustered into federal service as the 102nd Pennsylvania. The regiment was assigned to the Fourth Corps, Army of the Potomac in 1862, and later that year became part of the Sixth Corps, where it spent the remainder of the war. The 102nd won a reputation for hard fighting during the Overland Campaign and the Shenandoah Valley Campaign of 1864. After the war, members of the Pittsburgh Washington Infantry served in the Spanish-American War and World War I.

I had my eye on first editions of this book for quite some time. The history has particular sentimental value to me, as William Baumgarten is mentioned on its pages a couple of times. The book is also valuable for the rare photographs of regimental commanders, as well as complete muster rolls. After getting a little cash for Christmas, I decided to treat myself, and I purchased a first edition from a bookseller in Pittsburgh a couple of weeks ago. The book is in near fine condition, and I couldn't be happier with owning this regimental history with a family connection.

On a related note, back in November my Father attended a church function in Richland Township, Pennsylvania, where he had a long conversation with a neighbor, Richard Baumgarten. My family had wondered for years whether there was any family relationship to Richard. During the course of their chat, Richard mentioned that his grandfather, William, had been a Civil War veteran. When my Dad told me, I knew that I just had to talk to Richard. Could this William be the same William Baumgarten who fought with the 102nd Pennsylvania?

Flash forward a few weeks. My Dad paid a visit to Richard, who showed him an original photograph of William Baumgarten. When my Dad described the portrait to me, I realized that the photograph was the same one of William that I had acquired earlier last year from a Katie Baumgarten. Indeed, Richard was the grandson of Pvt. Baumgarten, 102nd Pennsylvania. And, it turns out, Katie is Richard's granddaughter!

I called Richard a few weeks ago. He and I had a very affable conversation about this grandfather. Richard's father, Frederick, along with another of William's sons, remained behind in Western Pennsylvania when William headed to Alabama. Richard's grandmother was William's first wife, Elizabeth, who died at childbirth in 1887. Richard only met William a couple of times. Unfortunately, he could not confirm the exact relationship between William and my Great Great Grandfather, John Baumgarten. Richard and I are going to meet the next time I am back in Gibsonia to go through his family history research, including materials compiled by one of William's stepgrandchildren. 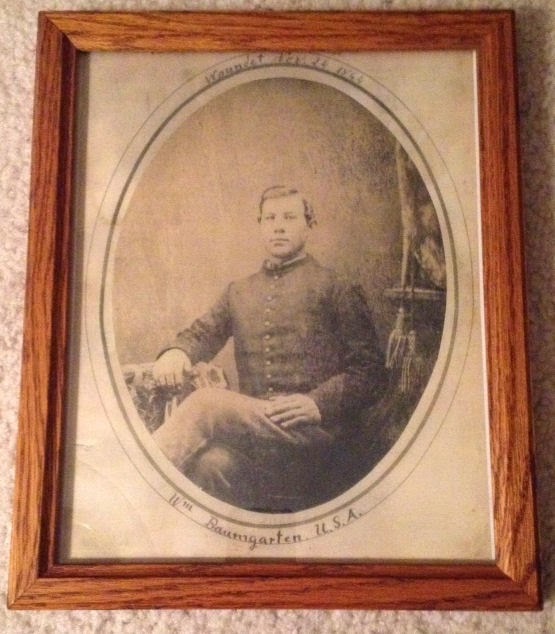 This past weekend my parents came to visit, and my Dad brought a very special gift from Richard--a large, framed copy of the portrait of William (above). I am truly amazed at life's little turns. Sometimes I see fate at work. After many years, I finally meet a former hometown neighbor who is part of my extended family, and who happens to be the direct descendant of a Civil War ancestor. The fact that Richard is a living grandson of a Union veteran is also remarkable and reminds me that we are not that far removed from the nation's most violent and destructive conflict and those who fought in it.

Posted by Ron Baumgarten at 7:22 AM