How about a little break from the current Confederate controversy? I've written often about my "Civil War ancestor," Pvt. William Baumgarten of the 102nd Pennsylvania. Unfortunately, I still don't know William's exact connection to my branch of the Baumgarten family. Based on the research I have done, I think that William may be a brother or a cousin to my Great Great Grandfather John. Whenever I get the chance, I try to uncover the family link. After all, my membership in the Sons of Union Veterans depends on it!

The other day I learned about the on-line archives of the Pittsburgh Post-Gazette. After a couple of searches (and paying for a month subscription), I found John's obituary from the January 23 and 24, 1936 editions of the paper. (January 23 is pictured below.) I learned some interesting facts about John, including his wife's maiden name and his exact street address, but was particularly drawn to the instructions at the bottom of the listing. The paper directed that the obituary also be circulated in the Ashland, Kentucky and Alabama papers. 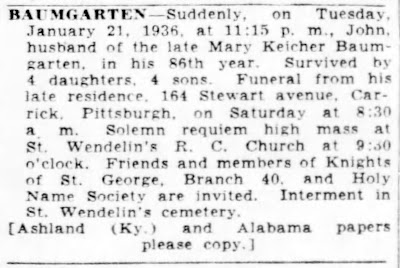 Those two states immediately rang a bell. John was related to a Reinhard Baumgarten, who had relocated to Ashland and died there in 1911. Moreover,William eventually found his way to Cullman, Alabama, where he passed away in 1921. It seems that someone in the Pittsburgh part of the family was seeking to spread the word of John's death to the Kentucky and Alabama branches. The obituary confirms a connection to those states, and further reinforces the possibility of a very close relationship among John, Reinhard, and William. 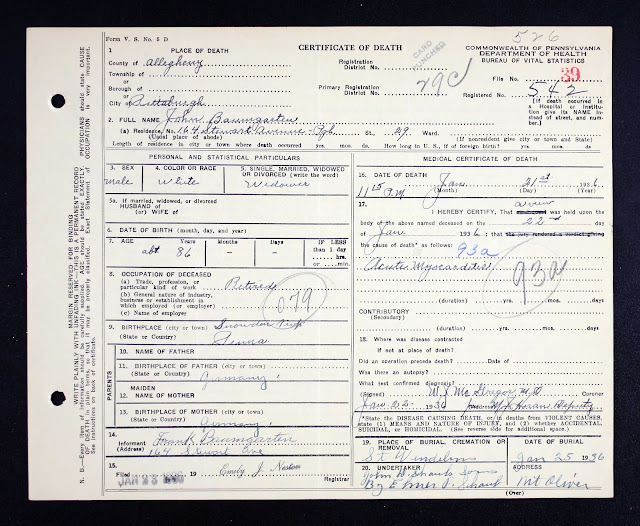 I also located John's death certificate on Ancestry.com. (It wasn't there a few months ago.) From this document I discovered that John was born in Snowden Township (now South Park Township), Pennsylvania. Unfortunately, his parents' names are not recorded, so I could not match them against the names of Reinhard and William's parents. That said, this additional information enabled me to be even more precise in my request to the Diocese of Pittsburgh for John's baptismal, communion, and marriage records. I am hoping that from these additional documents I will learn the parents' names and at long last confirm my relationship to William.

I am also excited to follow the path opened by the death certificate as to Snowden Township and how my family ended up there. The township was created in 1845, the year of William's birth and only five years before John arrived on the scene. I would like to dig deeper into this linkage to discover what John and his family's life was like in antebellum Pittsburgh. I'll be sure to report back when more information is available, but I am increasingly hopeful that I will learn whether John and William were brothers, and whether William is a distant uncle. Stay tuned.

Posted by Ron Baumgarten at 6:19 AM

I'm currently going through a search for family connections. It sure is more fun than some of the nonsense about flags and monuments, especially when you find something new. Best f luck in your search

Richard--Thanks for the comment. Glad to see you are back blogging! I have been following your recent posts, including the family history ones. I see we are both on to something. Indeed, I am glad to be back into researching again, both family history and some Civil War projects that I am toying with. This current debate is sad, and is distracting many people. The pure history is a way to escape the madness!