My wife and I had been planning an overnight trip to Virginia horse country (also known as "Mosby's Confederacy") this weekend, but she is getting a bit uncomfortable with the pregnancy.  We opted instead to make a day trip to Old Town Alexandria.  We used to live nearby, so finding an unexplored site can be a bit of a challenge.  I examined my guide to Civil War Alexandria and before long found something that I had not yet visited, and that was a perfect fit for the Memorial Day weekend.  So, before hitting the stores along King Street, we headed to Alexandria National Cemetery, hidden on Wilkes Street, away from the main commercial strip and the bustle of the weekend crowds. 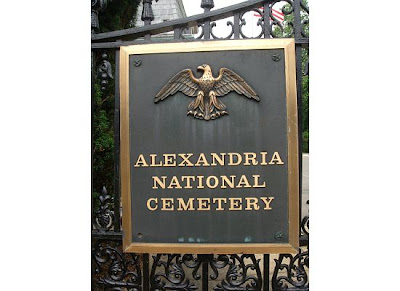 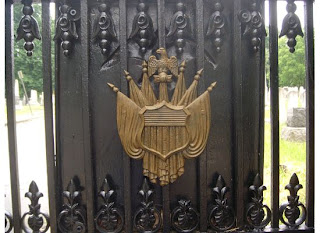 Ornate Union shield on wrought-iron entrance to the cemetery.  A Marine Corps Junior ROTC cadet attending a Memorial Day picnic at the cemetery informed me that his friend had repainted the entrance gate with more authentic paint as part of his Eagle Scout project.  (Nice to see youth involved in historic preservation!)


Most of the Civil War headstones are plain, marked by plot number, name, and state.  New York and Pennsylvania seemed to be well represented.  A few headstones were more ornate, perhaps purchased and supplied by the families of the deceased at some point during or after the war.  Scattered among the graves were some unknown soldiers.  A few soldiers from the world wars were also interred here.  Because it was just before Memorial Day, American flags had been placed at each grave, making for a very patriotic and moving scene. 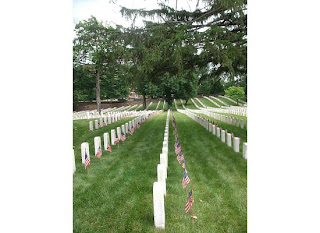 Headstones, Section A. Based on period photographs, the original markers were made of wood.  I have been unable to determine when headstones were installed. 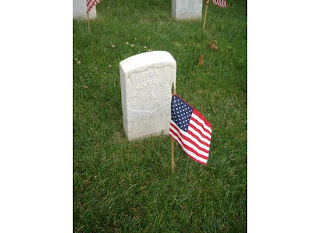 Plain headstone of a Pennsylvania solider 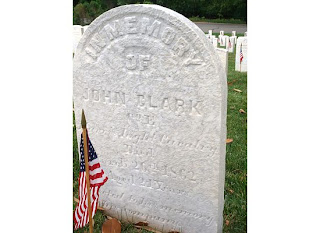 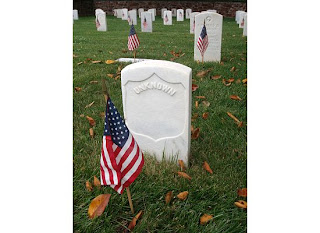 Grave of an unknown soldier

The cemetery also contains the graves of 229 African American soldiers.  Many of these dead were originally buried in the Alexandria Freedmen's Cemetery for contraband.  In 1864, African American soldiers petitioned the War Department for permission to be buried alongside their white comrades in arms, arguing that they had shared equally in the dangers and hardships of the war and should therefore share the same privileges and rights concerning burial.  Interestingly, the War Department granted the request, and the African American soldiers were re-interred in the Soldier's Cemetery.  (It would be fascinating to examine the documentation of the approval decision, which was rather forward-looking for the time, given the attitudes of many whites in the military ranks towards black soldiers.) 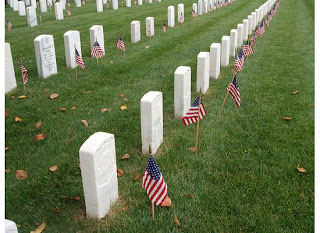 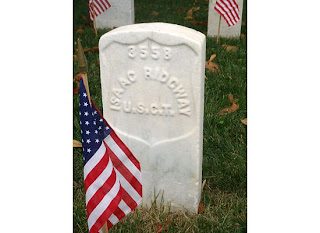 The Soldier's Cemetery also contains the remains of four soldiers from the U.S. Quartermaster Corps who drowned in the Potomac on April 24, 1865 while in pursuit of President Lincoln's assassin, John Wilkes Booth.  In July 1922, the U.S. Government erected a granite boulder to commemorate the service of Booth's pursuers. 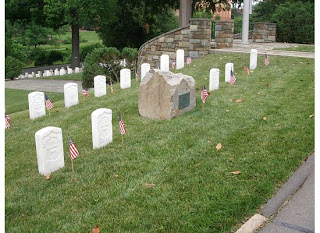 The four graves of Booth's pursuers and the granite memorial 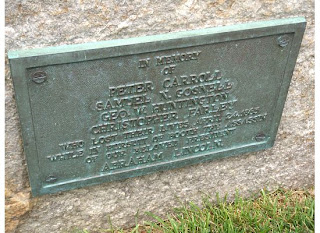 Inscription on memorial to Booth's pursuers

Overall, the Soldier's Cemetery is an interesting detour from the more famous colonial sites in Old Town.  It is a well-maintained example of a Civil War national cemetery and has a few interesting stories to tell visitors.

Posted by Ron Baumgarten at 5:03 PM

I lived in Alexandria and had no idea this cemetery was there. Love this blog! Thanks for sharing Ron. Suzie

Happy I could provide the info. I had no idea either, until the other day! A very interesting find. And glad you like the blog.

American Legion Post 24 hosts a ceremony every Memorial Day at 11am at the Alexandria National Ceremony. They have had veterans talk about their war experiences and historians talk about the cemetary. It was actually the first of the National Cemetaries to allow black soldiers to be buried there.

The location was dictated because it was close to the railroad in those days. The dead were sent back to Alexandria by train and removed near what is now the back of the cemetary.

Thanks for your comment, Mike. I will have to go down there on Memorial Day next year. And I hadn't thought of the railroad connection. I know the big yard used to be around there, so it makes sense that the cemetery would be placed where it was to make transportation that much easier.