Vienna and the Civil War

One Saturday not long after the record snowstorms in the DC area this past winter, I decided to go with my wife up the road to Vienna, Virginia, where she had a spa appointment.   I knew I wanted to get my stir-crazy self out of the house, but I wasn't sure what I could do while she was getting pampered.  So, I did what any self-respecting Civil War buff would do -- I looked at the Civil War Trails web page for Northern Virginia sites to see if there might be something historic to explore.  I wasn't expecting much.  The search, however, actually turned up a few places worth checking out.  Who knew?

During the Civil War, the Alexandria, Loudoun, & Hampshire Railroad ran through the town of Vienna.  This railroad, which began in Alexandria and passed through Fairfax and Loudoun Counties, was slated to reach the Shenandoah Valley and the plentiful coal fields of Hampton County (present-day West Virginia).  Natural barriers and the start of hostilities between North and South ended the railroad's progress.  By the outbreak of the war, the railroad ran only about as far as Leesburg, in Loudoun County. 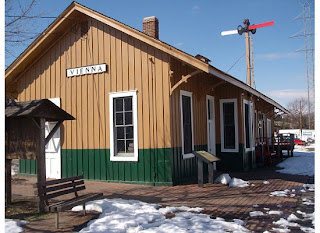 Railroad Station in Vienna (built in the 1880s; the Civil War era station is long gone)

Major General Irvin McDowell, the Union commander in the area who was soon to be trounced at First Bull Run, wanted to use the Alexandria, Loudoun, & Hampshire R.R. to move supplies and soldiers westward as part of the effort to engage the Confederate Army.  General Robert E. Lee, then-commander of the volunteer forces in the Commonwealth of Virginia, displayed the strategic insight for which he later would become so famous as head of the Army of Northern Virginia, and ordered the destruction of the tracks west of Vienna in late spring 1861.  Lee also took the liberty of sending a few locomotives south for Confederate use.

On June 17, 1861, not far from the station pictured above, around 700 South Carolina infantry and cavalry attacked a Union train carrying 271 soldiers of the 1st Ohio Volunteer Infantry.  The soldiers, in a panic, jumped from the railroad cars and sought cover in the nearby woods.  The engineer was not so eager to wait for the soldiers to return.  He unhitched the cars, left the troops behind, and raced the locomotive back to Alexandria.  The South Carolinians feared that Federal reinforcements were on the way.  They burned the abandoned cars and fell back.  Eight Union troops were killed in the skirmish. 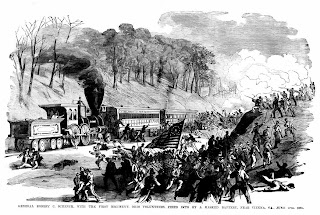 During the war, the Union used the railroad to move troops and supplies between Alexandria and Vienna.  Mounted guerrillas under the command of Colonel John Mosby, the famous leader of "Mosby's Rangers," harassed the line from 1863 onwards.

After the war, the Alexandria, Loudoun, & Hampshire R.R. evolved into the Washington & Old Dominion R.R.  The old railroad line is now a popular hiking and bicycling trail through Northern Virginia.

The war affected Vienna as it did many small Virginia towns around Washington.  The surrounding area served as a campground for both the Union and Confederate armies, and the town changed hands frequently.  Many residents fled Vienna rather than live through the tumult and uncertainty associated with civil conflict.  After the war, Northerners moved to Vienna, attracted by the mild climate, fertile soil, and proximity to the nation's capital. 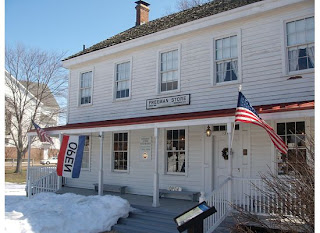 While strolling through the historic part of Vienna, I had a chance to visit the Freeman Store and Museum, run by Historic Vienna, Inc.  In 1859, the Lydecker family from New Jersey purchased property in Vienna and built a store and residence there.  They fled Vienna as the Civil War descended and disrupted life in the small town.  During the conflict, both sides occupied the Freeman's store and residence.  Union officers were quartered here and kept horses in the cellar.  (How that worked, I am not quite sure. And it must have been a bit malodorous!)  The Confederates used the property as a hospital.

Today, the Freeman Store and Museum houses a general store on the ground level, with an offering of candies, toys, Civil War books, and assorted souvenirs.  In the hallway off the main storeroom, one can read an original newspaper clipping concerning the June 17, 1861 skirmish in Vienna.  The level of detail in the article was surprising for such a small and inconsequential battle, but then again, it was early in the war and readers were likely hungry for such stories.  Upstairs houses a museum with rotating exhibits, as well as a parlor and dining room decorated with Victorian-era furnishings and other household items.

While in Vienna, I also walked over to the site of the Star Fort, located on the grounds of the American Legion post there.  The Civil War Trails marker indicates that the six-point, star-shaped fort was constructed on the highest point of land in the area sometime between 1863 and 1865.  Because Vienna changed hands so many times during the Civil War, researchers have been unable to determine whether the fort is Union or Confederate.  The outline of the Star Fort is difficult to perceive, and but for the marker, it would just look like any other wooded plot of land covered with dead leaves and snow. 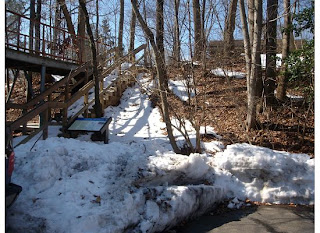 Staircase up to the Star Fort in Vienna, Virigina. Civil War Trails Marker is visible at the left foreground. More photos can be found here.

Ron,
Recommend you add to this the fact that Herman Melville wrote one of his only civil-war poems when visiting his cousin, stained at Vienna: :"A Scout to Aldie"

Nice description. BTW, Herman Melville wrote a poem, "The Scout toward Aldie" while visiting the 13th NY regiment in Vienna--about a scouting mission he joined, to hunt for Mosby.