In the first installment on the Civil War history of McLean, I described how the area around Lewinsville and Langley became one large encampment for part of the Army of the Potomac from October 1861 to March 1862.  I sometimes drive down Dolley Madison Boulevard on my way to Chain Bridge and try to imagine the rows of tents and huts, laid out like city streets, and the blue clad soldiers drilling or sitting around campfires boiling coffee. Only a red light jolts me back to this century.

Camp Griffin, one of the Union encampments in the McLean area, occupied the historic Salona property and neighboring farms near Langley, including land where the CIA is now located.  During the time of the Civil War, Salona was owned by the Smoot family, who fled to Georgetown with slaves in tow when the Union Army arrived. The property once belonged to Confederate General Robert E. Lee's father and, according to several accounts, housed President Madison during his flight from British invaders in August 1814. (Today, the Salona property is privately-owned, but Fairfax County has a perpetual easement on 41 acres of the property and plans to develop a multi-use park there.)

General "Baldy" Smith established his division headquarters at the Salona mansion.  According to Smoot family tradition, Salona also served as headquarters of General George McClellan, commander of the Army of the Potomac, from October 1,1861 to the following spring.  Correspondence from October 1861 indicates that McClellan had his headquarters in Lewinsville for a brief time.  He may have stayed at Salona, but for the most part, it appears that McClellan was based in Washington during the relevant time period. 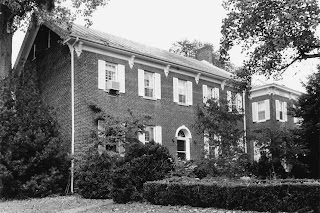 Salona House, c. early1970s (courtesy of Virginia Department of Historic Resources).  Because the house is on private property, I was unable to get close enough to take a picture. 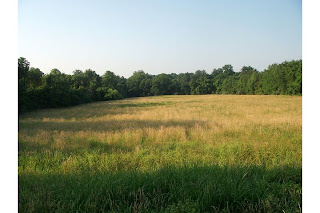 Field on the north side of the Salona property.  Photo was taken from Rt.123/Dolley Madison Blvd.
The famous First Vermont Brigade stayed at Camp Griffin starting in October 1861.  General Smith was instrumental in organizing this brigade, composed entirely of Vermont regiments (2nd, 3rd, 4th, 5th, and 6th Vermont Volunteer Infantry).  The Vermont Brigade would go on to distinguish itself in several major battles, including the Wilderness, Spotsylvania, and Cedar Creek. 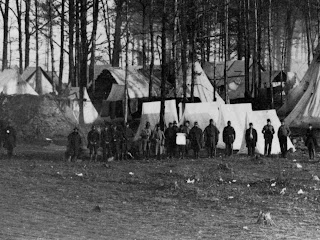 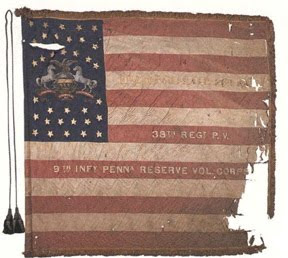 According to Jeffry Wert's book The Sword of Lincoln, it appears that the Army of Potomac's 1861-62 winter encampments, like Camp Griffin and Camp Pierpont, were miserable places.  The days were filled with rain, snow, and mud.  Christmas only made the men homesick.  The rank-and-file grew increasingly impatient with the army's inaction.  There had not been a major campaign since Bull Run the previous July.

The living conditions in cramped quarters became a breeding ground for diseases like typhoid fever, diarrhea, and pneumonia, which spread quickly throughout the camps.  Not far from Langley, the Union Army took over the sandstone house at Benvenue, located around the corner from where I live, and converted it into a hospital.  Hospital tents were also erected on the Benvenue property, and a cottage behind the main house sheltered nurses.  It is not difficult to the imagine the stream of sick young men who suffered at Benvenue during winter camp. 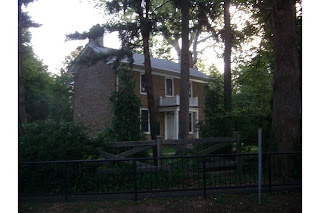 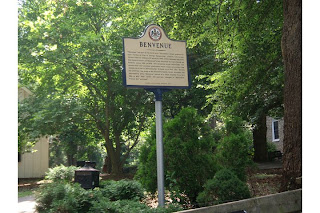 Fairfax County historic marker at Benvenue (for text of marker and other photos, go here)

Civilians in the Langley and Lewinsville experienced many hardships and depredations during the Union Army's occupation.  Northern soldiers cut down trees and dismantled fences and buildings.  They used the wood for fuel and for building huts and stables.  Troops and horses were quartered on local farms, and the constant wagon traffic cut roads through local fields.  The Lewinsville Presbyterian Church, founded in 1846, was converted into a stable.  The Union troops also confiscated cattle, as well as crops such as oats, corn and hay.  Some soldiers -- the usual bad seeds -- looted private property, taking furniture and other valuables.  When the Union Army moved out in March 1862, it left behind barren countryside and destroyed property.  I am sure that more than a few local residents were glad to see the massive encampment go.

I'm curious how you came to identify the picture of the camp with the men standing out front as that of the 2nd Vermont at Camp Griffin. I've seen the picture before and thought it closely resembled some taken at Hall's Hill.

I found the photo through an Internet image search, which turned up two sites:

I took the photo above from the first site. This photo appears to be an enlargement of part of the photo on the VHS website.

I should add that this location, particularly because it is in the woods, looks like the headquarters encampment of Gen. Fitz John Porter at Halls Hill, Va., which also included the headquarters of two of his brigades. The time of day and atmosphere resemble those of two other photos I have seen. I don't think the reference copy at the Library of Congress says what the subject is. The original may have the name of the photographer, which might narrow things.

I had the opportunity to see this photo at the VT Historical Society while researching Eli Ellenwood of the VT 2nd. It's part of a collection of photos from George Houghton, the only Civil War photographer from VT. The location was identified on the back of the photo.

Lynn--Thanks so much for the information. I need to make a trip up there to the historical society! I have heard there are a lot of items on file concerning the camps around present-day McLean.

i live about two hundred yards from Salona Manor. My street is just right of the field in the picture. Down the street in a neighbor's lawn, now covered by ivy, is what i refer to as "The Civil War Rock," as I had seen a photo of Union soldiers perched on the rock looking west toward what is now the Franklin Sherman Elementary School.

Behind the rock,on Salona Manor--property of the late state senator Clive Duvall--is a natural spring and a brook flowing from the spring, which i believe Union soldiers used at Camp Griffin. Now the area is home to a herd of white-tail deer. I understand Civil War artifacts have been found there. Just FYI.

Dixie--Thanks for your comment. I think I saw the ivy-covered rock when I was out walking in your neighborhood one day. Incidentally, I am sure you've seen that it is pictured in a famous photo that graces the cover of the Civil War companion book to the Ken Burns' documentary. Thanks for passing along the info about the spring and artifacts. I am sure there are a lot of interesting things in the ground in and around the former location of Camp Griffin!