While undertaking some research on the Union Army camps around Langley and Lewinsville, I came across an interesting website published by Saint Mary's College Library in Moraga, California.   "The Civil War Letters of Forrest Little" contains links to transcriptions of 23 letters written by Private Forrest Little of the 5th Vermont Volunteer Infantry between October 1861 to July 1862.  Although Little's letters are not as well written as other soldiers' writings that I have encountered, they nonetheless offer us a view of life in Camp Griffin during the winter of 1861-62.  Little continued writing home during the Peninsula Campaign and later died of typhoid fever at Harrison's Landing, Virgina in July 1862.  An article by Professor Carl Guarneri of St. Mary's College does a good job of placing Little's letters in context.

The Army of the Potomac-Scene In Camp After Evening Parade, Harper's Weekly, November 2, 1861 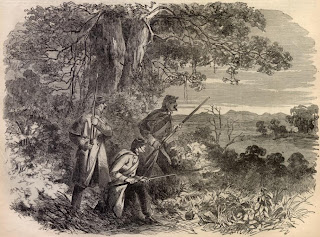 Camp Griffin was as far as a young man could get from the comforts of home.  Little complains about the weather, which was cold, rainy, and sometimes snowy.  He writes often of the excessive mud that the soldiers had to contend with.  Not surprisingly, many soldiers fell ill, and Little notes that at one point, 34 of his company of about 100 were on the sick list.  Daily life in camp was relatively dull.  Little served as the company cook, drilled and paraded with the men of his regiment, and was detailed to picket duty.  Despite any boredom, he resisted the temptations of "rot gut," or so he told his parents.  In one of his letters, Little describes a foraging expedition during which soldiers bayoneted the pigs of a local farmer, who could do nothing but "stand by and grate his teeth."  However, not all relations with  the civilian population were so acrimonious.  In fact, Little was invited to supper with a local female, whose company  he undoubtedly enjoyed.  Little, like other soldiers that winter, was itching for a fight and frequently worried that the war would end before he could have the chance to take on the Rebels.  That opportunity would soon come on the Virginia Peninsula.

These letters are just a start for understanding the experiences of soldiers encamped at Langley and Lewinsville in the winter of 1861-62.  I hope to locate and read many others as I continue my research on the life of common soldiers posted to Camps Griffin and Pierpont, and I'll be sure to write about other finds.

Posted by Ron Baumgarten at 8:15 PM