You Call That a Documentary?


Recently I began to record old episodes of Civil War Combat and Civil War Journal on my DVR.   These shows are now broadcast very early in the morning on the Military History Channel.  While watching a relatively detailed episode on the Battle of Chancellorsville, I reflected on just how far History Channel (the original broadcaster) has fallen since the 1990s and early 2000s.  Today, the History Channel offers hours of reality TV that have nothing to do with history (think Ice Road Truckers), and when it does dare to venture into history, the offerings are weak, including shows on ancient aliens and Nostradamus.  Even the much-anticipated America The Story of Us was far from satisfying.  What have we come to when celebrities like Michael Douglas are substituted for historians and offer vague generalities about the life and meaning of Lincoln?  Or when computer-generated graphics and character actors who bear little resemblance to the actual persons are substituted for the timeless and haunting images of Matthew Brady?

Attending the opening night of the new National Archives exhibit Discovering the Civil War I managed to chat briefly with director and producer Ken Burns.  I expressed my disappointment with America the Story of Us and complimented Burns on how he had set the gold standard with his 1990 documentary The Civil War.  Burns offered a confident assessment of the popular appeal of his own style of film making.  Viewers don't need to be reeled in with computer graphics and a "dumbed down" view of events.  According to Burns, his own documentary on the Civil War drew more viewers than the first night of the History Channel's recent foray into American history. 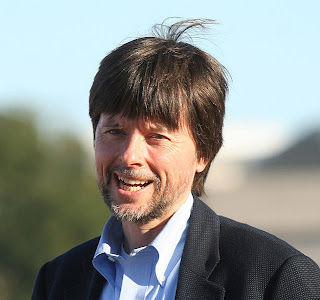 So why do the History Channel and its brethren continue to produce such poor history programming, when they produce it at all?  I suppose TV executives think that they know their audiences.  This is an age of instant gratification and short attention spans.  Give viewers what they seek: flashy and fast.  The ad dollars will pour in.  There is no room for any degree of depth, never mind that at one time, the History Channel thought that it could air shows about Civil War battles at the divisional and brigade level.  I, for one, am glad that PBS is still around to put faith in America's TV viewers and offer quality historical programming, such as American Experience documentaries. Otherwise, we'd raise a generation more knowledgeable about imagined alien invasions than Gettysburg.

Posted by Ron Baumgarten at 9:57 PM

Ron, you make me laugh! I got a 24 hour bug back in December and I woke up at 3am. What did I watch? Ancient Aliens. Yes, I watched the show. It was so weird, I couldn't believe it was the History Channel. I'm with you on this one!

I have to admit to watching an episode of Ice Road Truckers every once and a while...but I still stand by my commentary! I read somewhere that History Channel tries to justify it's reality shows by saying that they reflect history in the making. Ummm...yeah.