Some Vintage Adverts and a Word About an Old Newspaper

My research over the last couple of weeks has led me to some on-line newspaper collections. The Library of Congress maintains the historic newspaper database, Chronicling America. This digitized collection contains a few Civil War-era newspapers for the Washington, DC area. I have found these papers useful in learning more about the 19th century landowners in and around Lewinsville and Langley, Virginia. Of course, I have also stumbled upon some fun advertisements during the course of my research. These ads provide a fascinating glimpse into daily life around the nation's capital prior to the war.

Take, for instance, the following lost and found ad from the October 7, 1856 edition of the Washington Evening Star: 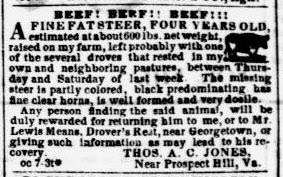 Lewis D. Means owned property in Langley that the Union Army eventually seized for use as a contraband farm. However, at some point during the 1850s, he resided in Washington City and ran a tavern and drove yard. This ad mentions his "Drover's Rest, near Georgetown." Thomas A. C. Jones, the steer's owner, made some sort of arrangement with Means to ensure that his prized possession found its way back home. Jones lived near Prospect Hill, which was to the west of Langley along the Leesburg-Georgetown Turnpike. Apparently the roads of Northern Virginia were filled with enough men herding cattle that a farmer could lose his steer among them!

And how about a little something for "back to school"? The following ad appeared in the September 1, 1860 edition of the Evening Star: This school was located near Peach Grove (essentially today's Tyson's Corner) and likely operated from the Strawberry Vale Manor, which was built around 1780. The educational program offered "young ladies" classes in a variety of subjects, including music, art, and languages. This ad appeared in the paper alongside many other classifieds for women's academies; such institutions became prevalent in the United States during the 19th century. I'd be curious to learn about the composition of the student body. For example, how many young women, if any, were sent all the way to Peach Grove from Washington or Georgetown? The Board of Trustees of the Strawberry Vale Institute includes Lewis Means and several other men who were apparently enlightened enough to believe in women's secondary education. (I'll be talking about Dr. McVeigh in a future post.)

The Alexandria Gazette and the Alexandria Local News are vital primary sources for anyone researching the Civil War in Northern Virginia and Washington. Unfortunately, Chronicling America does not provide digital access to copies of the Gazette before 1887. The Fairfax County's Historical Newspaper Index is searchable for Gazette articles from the Civil War era, but digital copies are not available. Instead, a researcher must trek to the Virginia Room at the City of Fairfax Regional Library to print articles from microfilm, or order the hard copies, which can take a few weeks.

Imagine my excitement the other day when I learned that the Arlington Public Library provides on-line access to copies of the Gazette from 1808 to 1876. Use of the database is free of charge, but requires an Arlington Public Library card. Those living, working, or attending school in Arlington Country are eligible to receive a card, as are residents from reciprocal jurisdictions like Alexandria, DC, and Fairfax County. I have already found a treasure trove of Gazette articles related to my research on the contraband camps. This is just another example of how the digital revolution has brought historical archives to the home.

N.A.R.A., U.S. Federal Census Returns for the District of Columbia, 1860 (available at ancestry.com); National Women's History Museum, "1800s: Secondary Education for Women," The History of Women and Education (website).
Posted by Ron Baumgarten at 6:08 AM