A Snapshot of Virginia on the Brink: The "Alexandria Gazette," January 19, 1861

The other day while researching for a future post on contraband camps in Northern Virginia, I came across a copy of the January 19, 1861 edition of the Alexandria Gazette. I soon realized the historic value of this particular paper. The articles and classifieds on page three paint a fascinating picture of Virginia on the precipice of the Civil War. The Commonwealth had not yet left the Union, but events were unfolding that would set Virginia on the tragic road to secession. Meanwhile, an innkeeper from Fairfax had just opened a business in Alexandria that would soon become a scene of wartime violence and martyrdom.


In mid-January 1861, the General Assembly of Virginia called for a state convention to consider the question of secession. By the time the Gazette was published on January 19, the campaign to elect delegates was in full swing. The paper published several items related to candidates in Northern Virginia:

The election for delegates was held on February 4, 1861. (See my previous post here.) Moss, a supporter of secession, lost to moderate Unionist William Dulany. George W. Brent, a strong pro-Union candidate from Alexandria County, won his election to the Convention. Janney and Carter, both Unionist candidates, took Loudoun's two seats. Janney would go on to become the President of the Convention. On April 17 the Convention voted to leave the Union, although Brent, Carter, Dulany, and Janney joined the minority against the Ordinance of Secession. Both Dulany and Brent, who placed loyalty to Virginia first and foremost despite their votes in the Convention, served as Confederate officers.

The January 19 edition of the Gazette also reported on a new innkeeper in town:

James Jackson, apparently eager to spread the word about his business, also placed a glowing advertisement in the same paper: 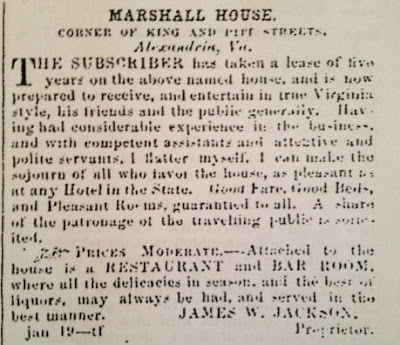 Only a few short months later, the Marshall House would make headlines across the county. On May 23, Virginia voters ratified the Ordinance of Secession by overwhelming numbers. In a public display of his allegiance to the secessionist cause, Jackson hoisted the stars and bars above the Marshall House. As Federal troops moved to occupy Alexandria on May 24, Col. Elmer Ellsworth of the 11th New York Fire Zouaves rushed to the roof of the Marshall House and ripped down the Confederate flag flying there. Jackson confronted Ellsworth in the stairwell and shot him dead. Cpl. Francis Brownell of the Fire Zouaves then killed Jackson with a musket blast. In the aftermath of Ellsworth's death, the young colonel and friend of Lincoln became a martyr for the Union cause. Confederates in Virginia and elsewhere exalted Jackson as a hero who made the ultimate sacrifice in the name of Southern independence. Almost immediately, souvenir hunters began to carry away pieces of the Marshall House. Jackson's new business venture, announced with great fanfare in the Gazette, had become just another casualty of war.

This one page in the Gazette speaks volumes about the interconnectedness of history. The fate of Jackson and the Marshall House were related to the Virginia Convention in ways that no one could have imagined on January 19, 1861. The Unionist candidates from Northern Virginia still hoped that secession could be averted. Jackson supported a break with the Union, but he also had a business to run and money to make. The Convention unleashed forces beyond the Unionist delegates' control. Secession and war soon followed. Jackson, a local innkeeper only months before, met his demise confronting Union troops and came to symbolize the Confederate cause in the early days of the conflict. On January 19, no one knew what the future would hold. Yet the story was all right there, on page three, waiting to happen.