If you are a frequent reader, you may have wondered what happened to the blog. I try to publish a post every two weeks or so. This past couple of months was the longest "dry spell" since I began the blog in 2010. Today I am finally back, and would like to wish everyone a belated Happy New Year!

So what gives? I guess you could say that I needed to disconnect in order to reconnect. The pace had been relatively intensive, particularly as I tried to balance a busy full-time job, family, and numerous activities and hobbies. I also had a bit of Sesquicentennial burn out -- not  one day passed in four years where I wasn't doing something related to the Civil War. I like to think that my recent time away (and model building with my son Jack) has reinvigorated me for the year ahead.

*My blog has brought me into contact with a lot of people I may not otherwise have met and has enabled me to expand my Civil War universe outside of the blog. As noted previously, I have started to do volunteer research for the Fairfax Station Railroad Museum. I have also begun exploring ways to help the Manassas Battlefield Trust (MBT). I will keep readers posted on any upcoming activities. Meanwhile, Debra Kathman, the Executive Director of MBT, recently sent me some interview questions. (I posted a Q&A with Debra last year.) They should be up and running soon on the MBT website.

*Speaking of Manassas, I recently purchased a copy of John Hennessy's masterful book, The First Battle of Manassas: An End to Innocence, July 18-21, 1861. John has revised his first edition and re-released it through Stackpole. I bought my own autographed copy directly from him. I thoroughly enjoyed reading this book -- my first of 2016 -- and can't recommend it enough. To use an oxymoron, it is a tactical page turner! Even if you think you know First Bull Run pretty well, you are sure to discover something new, and be entertained at the same time.

*On a related note, Harry Smeltzer over at Bull Runnings published an interview with John, who offered to lead a tour of the First Manassas battlefield for Harry's blog readers. The suggestion has now come to fruition. The tour will be held at Manassas National Battlefield Park on Saturday, April 23. More information is available over at Harry's blog, and on the dedicated Facebook page for the tour. Expected attendance is growing, and a car pool caravan will be the chief mode of transport. If you plan on going, be sure to read John's book. 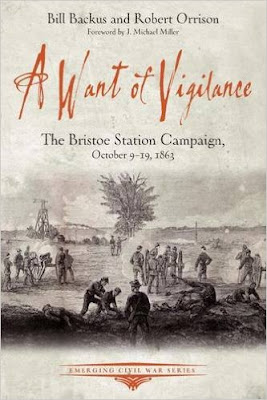 *Last fall Savas Beatie sent me a copy of one of the latest titles in the Emerging Civil War (ECW) series, A Want of Vigilance: The Bristoe Station Campaign, October 9-19, 1863 by Bill Backus and Rob Orrison. This book appears only a couple years or so after the publisher's detailed atlas on the Bristoe Campaign. Together, they help to fill in some gaps in the literature between Gettysburg and the Overland Campaign. Like all ECW books, A Want of Vigilance is a slim volume packed with key facts, plenty of photos and maps, and a driving tour. The authors, both old hands at the Bristoe Station Battlefield, cover all the major aspects of the campaign, from James Station to Buckland Mills. Six appendixes, including an order of battle and a chronology of battlefield preservation, round out the book. A Want of Vigilance makes for a good, fast read on a little known but important part of the war.

*I maintain a list of potential topics for future posts. My ability to add to the list has far surpassed my ability to keep up. Some of the subjects don't even seem that appealing to me any more. (Perhaps I should take a vote on what readers prefer!) As I gear up for 2016, I am thinking broadly of where I want to take the blog. Not surprisingly, more on Northern Virginia's contraband camps is in the offering. I also plan to report my findings on soldier and civilian life around Fairfax Station. I've lived in Loudoun for well over a year now -- I think it may be time to write a little more on the Civil War in my backyard. I've already mentioned my interest in the Loudoun Valley Campaign of 1862, but haven't had a chance to dig deeper. And what about those Union Army campsites down the road, or the history of some Loudoun families during the war? If anything, I can help to spread the word about the best resources on Loudoun's antebellum and Civil War history. This year I also hope to continue features such as Civil War Views, travelogues, and Q&As. Forward march!
Posted by Ron Baumgarten at 6:05 AM

It's good to see this post. Sometimes a break is just needed, especially from something that does not pay the bills.

One good thing you did, though, was to keep posting on Facebook, so you still had some presence in the cyber world.

As far as topics, I would rather have too many worth time than not enough. I've had trouble finding stuff at times, though I'm in good shape now and for the foreseeable future (or so I hope.)

Glad to see you are back on the saddle as well. I agree completely that it's good to take a break sometimes. We can all burnout on our favorite subject from time to time! It makes you appreciate it even more. I just felt so supersaturated after 4 years of the Sesqui.

FB and Twitter are great in that they allow you to stay "present" and connect with readers, but with minimal time outlay. I often post things there that 6 years ago I would have put in a post!

The secret to topic development is to think of some of the most obscure "local" history subjects (state, town, county, even neighborhood). You'd be surprised at what you find! Of course, it won't get as many hits as Gettysburg, but you can sure learn a lot.

Having just moved to Leesburg, I'd appreciate anything about the area! I hear there was some action around here. ;^)

Imagine that! There is too much out there, and many stories have been told several times over. An intro book I'd recommend is "The Civil War in Loudoun County, Virginia" by Meserve. You also should check out "A Little Short of Boats," Morgan's book on Ball's Bluff. Of course, anything on Mosby will also talk about this neck of the woods. Craig Swain's blog does a great job in retracing the march of the AoP through the area as well.