Symbols of the "Lost Cause" in Alexandria

Alexandria, a charming town outside of Washington, DC, is known as much for its chic boutiques and fine restaurants as for its colonial past.  Just below the surface, however, lie reminders that this town was once inhabited by Confederate sympathizers who resented Union occupation during the Civil War and sought to commemorate the so-called "Lost Cause" in the years following Appomattox.  One of the most striking symbols of this past is the statue of a Rebel soldier located at the intersection of S. Washington and Prince Streets.  The Sons of Confederate Veterans led the effort to erect this memorial to Alexandria's Confederate dead.  Dedicated in 1889 by Governor Fitzhugh Lee, nephew of Robert E. Lee and a former major general of cavalry in the Army of Northern Virginia, the statue defiantly faces away from the nation's capital.  An 1890 act of the Virginia House of  Delegates prohibited the statue from being moved to another location. 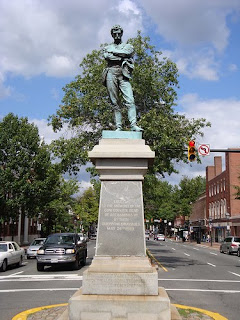 But there are other, more hidden signs, that tourists and residents walk past every day without ever taking notice.  Before eating at Jackson 20 the other day, I paused to snap a picture of a marker affixed to the Hotel Monaco on King Street.  The hotel is located on the site of the Marshall House, where on May 24, 1861 Union Col. Elmer E. Ellsworth of the 11th New York "Fire Zouaves" was shot to death by innkeeper James Jackson after having torn down the Stars and Bars flying from the roof.  Jackson in turn was killed on the spot by one of Ellsworth's men.  In the immediate aftermath of Ellsworth's death, the young colonel and friend of Lincoln became a martyr for the Northern cause.  The South exalted Jackson as a defender of property rights in the face of Yankee aggression.

The marker on the Hotel Monaco, placed by the Sons and Daughters of Confederate Veterans, salutes Jackson as "the first martyr to the cause of Southern independence."  (The date the marker was affixed is uncertain, although it has survived the change in ownership from Holiday Inn to Hotel Monaco.)  I shouldn't have been surprised to find this memorial, but I was.  Even an incident like the murder of Ellsworth survived the war to stir passions and drive Southerners to honor the alleged "heroics" of an innkeeper who used excessive and deadly force to deal with the removal of a simple flag. 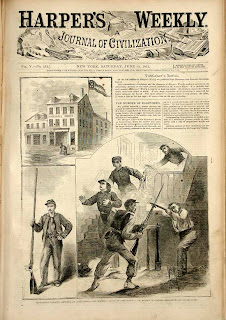 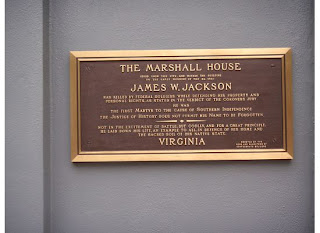 The problems with the Lost Cause mythology are numerous and are well documented in the literature of Civil War memory.  At the same time, the placement of such markers and monuments in the aftermath of the Civil War helped the United States to begin the process of reconciling, however ironic that may seem.  Within a reunited nation, Southerners were allowed to honor their "Lost Cause," veterans, and war dead.  The North would look the other way and erect its own monuments.  Unfortunately and tragically, the African American experience, and civil rights for freed slaves and their descendants, were neglected in a rush to "bind up the nation's wounds."  It would take over a hundred years to truly bind those wounds, and even then, they are sometimes still very close to the surface.

So, what to do with these markers and monuments?  After all, these tributes are part of history, and when properly explained and placed in context, they tell a powerful story of how previous generations of Americans remembered and dealt with civil conflict.  They also stand in some instances to honor war dead, even if the soldiers died for the wrong reasons.  Rather than remove such vestiges of a past that some would rather condemn and forget, these monuments and markers of the Lost Cause should be viewed critically next to sites that represent other aspects of the Civil War-era experience in Alexandria.  The Freedom House Museum, located in a former slave pen on Duke Street, features exhibits on slavery in Alexandria and beyond.  The City of Alexandria runs the Alexandria Black History Museum, and the Alexandria National Cemetery contains the graves of over 200 U.S. Colored Troops who gave their lives in service to the Union.  (See here, here, and here).  Fort Ward Museum, on the outskirts of Old Town, explains what life was like for Union soldiers stationed in one of the numerous forts in Northern Virginia guarding the area around Washington.  Alexandria can tell a story about all Americans affected by the Civil War.  All that we need to do is look, listen, and reflect.
Posted by Ron Baumgarten at 7:04 AM

While I agree with the majority of your opinion, there are a couple points with which I take slight issue:

(1) You said that the statue (it's really a monument, but that's a minor point) "defiantly" faces away from the North. That's probably a stretch to use that term. The expression on the soldier's face is not one of defiance, but rather is one of introspection and (perhaps) a bit of sadness at the remembrance of fallen comrades, maybe even lost friends.

(2) Although a relative of Robert E. Lee was one of the principals who helped raise funds for the monument, it's not a certainty that the monument is in memory of the "Lost Cause" of the South. Very likely, and especially with the passage of nearly 25 years, the aging soldiers who placed the monument were simply remembering fellow friends and comrades-in-arms who were no longer alive to enjoy life's golden years. After all, the north side of the base reads, "They died in the consciousness of duty faithfully performed," while the south side reads, "Erected to the memory of Confederate dead of Alexandria, Va. by their Surviving Comrades, May 24th 1889."

(3) To expand the context of this monument, it is appropriate to recall that its location is the point from which the men of Alexandria marched off to war.

Aside from these points (and, even in spite of them), I congratulate you on the sensitive and thoughtful article you wrote.

Thanks for your comment, and glad to see you find the conclusions thoughtful. I agree that largely speaking, the monument was erected to honor fellow Confederate veterans. I used the term "Lost Cause" loosely, as when it is attached to actions in the South during the late 19th and early 20th century that romanticized and commemorated the Confederate cause. The Jackson marker, however, may have been more politically motivated by proponents of the Lost Cause school of thought. And "defiantly" is for dramatic effect....artistic license. Although I did see accounts where it is noted that the statue was placed deliberately with its back to DC.