As we saw in my last post, the war had not gone well for the 79th New York.  The regiment, known as the "Cameron Highlanders," had experienced high losses at Bull Run and mutinied when faced with the prospect of many more years of fighting.  The soldiers had witnessed the ultimate humiliation of their colors being taken away on orders from General McClellan.  As the 79th set out with the reconnaissance force to Lewinsville on September 11, 1861, the soldiers must surely have realized that they had already lost a lot, and could lose even more. 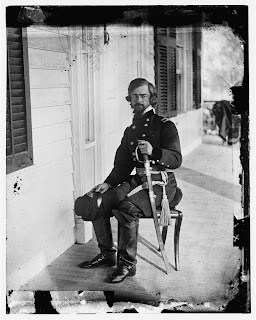 The Village of Lewinsville during the war, Harper's Weekly, December 14, 1861

Stevens set out from Camp Advance around 7:30 in the morning and arrived at Lewinsville around 10 am.  He immediately placed the troops in a defensive perimeter around the village.  The 79th New York was stopped about one-third a mile from Lewinsville, and according to Stevens, "a heavy body [of the Highlanders] were thrown out as skirmishers to cover the country towards Falls Church."

The reconnaissance was successful and recall was sounded around 2 pm.  Southern pickets, however, had been eyeing the Union presence and sent word to the Confederate lines. Colonel J.E.B. Stuart rode to Lewinsville with a small force and unleashed an attack just as the Union soldiers were assembling and preparing to return to Camp Advance. The 79th, caught near the Gilbert family house, faced fire from both musket and cannon.  Stevens decided to continue the march back to camp, rather than engage his whole force, and ordered Griffin's battery to cover the withdrawal from Lewinsville.  The 79th New York helped to protect the retiring Union soldiers and provided support to a battery which had arrived on the field.   The entire force reached Camp Advance in relatively good order.  Overall, casualties were light, with about two Union soldiers killed, 13 wounded, and three captured.

In reports filed after the battle, commanders sung the praises of the 79th New York.  According to Lieutenant Colonel Alexander Shaler of the 65th New York, who had immediate command of the 79th during the battle:

The conduct of the officers and men of the Seventy-ninth while under my command was in the highest degree praiseworthy. They gave undoubted evidence of their bravery and resoluteness.

Captain David Ireland of the 79th explained that:

The conduct of the officers and men on this occasion was all that could be desired. They were cool and collected, behaving as well as if on parade, and more like veteran troops than volunteers. Where all did so well it would be wrong to individualize.

To Lieutenant Samuel R. Elliott of the 79th, who was engaged around the Gilbert house:

The men throughout behaved admirably; even after it became certain that those crouching forms were the enemy's advance they showed less trepidation than perhaps I might have wished for the sake of celerity.

We may not know whether these officers were motivated by some self-interested or altruistic desire to see the 79th's reputation rehabilitated.  Or perhaps the Federal officers were so relieved that the ranks did not panic and run like at Bull Run that they were overly effusive in their praise.  Regardless, the 79th New York had performed up to par, and was congratulated after the battle by General McClellan himself.  (From various secondary accounts, it is unclear whether the commander of the Army of the Potomac met the troops in camp, or on the road around present-day McLean.)

A few days later, on September 14, no less an officer than "Little Mac" wrote to General Smith:

The colors of the New York Seventy-ninth will be sent to you to- morrow. Please return them to the regiment, with the remark that they have shown by their conduct in the reconnaissance of the 11th instant that they are worthy to carry the banner into action, and the commanding general is confident they will always in future sustain and confirm him in the favorable opinion he has formed of them.

The Battle of Lewinsville may be little remembered, but to the men of the 79th, it was a fight to re-take the colors, from the Union Army itself.

Posted by Ron Baumgarten at 6:43 PM

I just found your blog this week. I'm not really a blogger, but I'm researching an article on the early experiences of the 65th NY Volunteers (1st U.S. Chasseurs). I found you on Google. You seem to be an expert on the Skirmish at Lewinsville, where the 65th (including my great-great grandfather if he was in one of the 4 companies sent out from the reg't) first saw action. I wonder if you could recommend any sources for me on this skirmish, besides what is in the OR? Also, is there anything to see today from the battlefield or is it entirely swallowed up by Northern VA development? I used to teach at Landon School in Bethesda, MD so know a bit about the Fairfax County sprawl. Thanks!

Thanks for your comment. It is great you have a family connection to the Battle of Lewinsville.

I actually live right down the street from the area where the skirmish took place. The battle occurred at least in part on the grounds of current-day Lewinsville Park. The Gilbert House, mentioned in the OR, survives, but otherwise there are a lot of sports fields there now. The intersection of Great Falls St. and Chain Bridge Rd. also still exists. My understanding is that a VA Civil War Trails sign will be placed near the site at some point this year.

There are a couple of books that contain some information about the skirmish. Check out "The Glories of War: Small Battles and Early Heroes of 1861," by local historian Charles P. Poland, Jr., as well as Russel Beatie's "McClellan Takes Command," in his Army of the Potomac trilogy. Both have pretty good accounts, although I consider them to have a few errors. Stephen Sears' book on McClellan's wartime correspondence also contains an document or two about the skirmish. In addition, the Fairfax County Historical Society yearbook had an article on Lewinsville in Vol. 29, 2003-04.

Hope this helps. If you need any more information, feel free to email me at ronbaum@yahoo.com. And I'd love to see your article when you've finished.

Thanks so much, Ron. That's a good deal of info. with which to start. I very much appreciate your time and effort. I'll be in touch once I make some progress. I found a letter from an officer from the 65th at the skirmish in Carlisle 2 summers back, and some good newspaper accounts of the regiment leaving NY in late August last summer, so now it's on to reading up and learning about this skirmish which I knew next to nothing about until this week!

Glad to be of help. One of my purposes for doing the blog is to spread the word about some of these lesser-known Civil War events that happened around DC. They are sometimes so obscure that a lot of locals may have no idea what happened in their own backyards 150 years ago!

Look forward to hearing more about your research.

My article is coming along OK. Thanks again for your help with sources. I'm wondering--where is the Gilbert House in relation to Lewinsville Park, and can you see it on Google Map?

Chris--You are welcome. The Gilbert House is located within Lewinsville Park, at the very back. I could see the house using a satellite map from Google Maps, but no street view is available. If you'd like a picture, email me at ronbaum@yahoo.com, and I can send you one that I have taken. By the way, I recently purchased "The Maps of Bull Run." This book contains a map of the Battle of Lewinsville, so you may want to check it out.

Thanks Ron--will email you later today. I'll look for the book too. I found an old map from the bio. of General Isaac Stevens written by his son, an adapted version of which is also in the Beatie book. Is the Gilbert House the big one with the parking lot which is visible on the satellite map?

Sounds good. I will have to look for the Stevens bio. (Did you notice how the Beatie book implies that the battle took place around Vienna? He is geographically far off base there.) Interestingly enough, I uncovered a lot more on the Confederate side of the battle while doing some recent research for upcoming posts.

The Gilbert House is the big one near the parking lot. I verified that it is the same house when I found a picture of it in a local historian's photographic history of McLean. There is also an open field next to the house--seems like this might be near where the action took place.

I will be taking my family down to Arlington for a few days to visit Mt. Vernon and catch up with old friends and colleagues at Landon School. I also plan on visiting the Lewinsville battlefield site, or what's left of it. I'll likely be there Fri. Apr. 13th in the AM. I assume you have work to go to, but just in case you were around I'd love to get a tour of Lewinsville Park with some orienting about the Lewinsville skirmish. Am cleaning up my piece on the battle, in fact have found 2 great sources on the 65th which I've used. This summer I plan on continuing the 65th's story and including the Peninsula Campaign. Thanks again for the early help!

Sounds like a good trip. I will be in town on April 13, but am usually at work during the day. If we could meet on the earlier side--like at 8--I could accompany you around the park for an hour or so before heading into town. It would be nice to compare notes and hear about your new sources. If another day works for you, we could try to do that as well. If you want, please feel free to email at ronbaum@yahoo.com and we can figure something out.