Weekend Excursion to Mosby's Confederacy: From Paris to Atoka


This past weekend my wife and I took a trip to Virginia hunt country for our second wedding anniversary.  Civil War enthusiasts know this area better as "Mosby's Confederacy."  We stayed in the amazing Ashby Inn in Paris and ate at the top-notch restaurant there.  My wife was so kind as to indulge my interest in the Civil War, and we visited several historical sites, including those in and around Paris.  Not everything was related to the Gray Ghost's exploits.  The area played a role in many other events during the course of the war, and sites are scattered across the towns and farmland of Fauquier and Loudoun Counties.  Given our limited amount of time, however, my wife and I stuck mainly with the Mosby-related sites.

Nestled at the foot of Ashby's Gap in the Blue Ridge Mountains along what used to be the Ashby's Gap Turnpike, Paris was a frequent haunt and rendez-vous point for Mosby's Rangers.  Despite the enticements of the small town, the Rangers boarded in isolated farmhouses around Paris, where they could remain undetected between raids.  The area near Paris also saw the passage of General Thomas J. Jackson's Confederate brigade on the way to First Manassas in July 1861, before Jackson won his famous nickname. 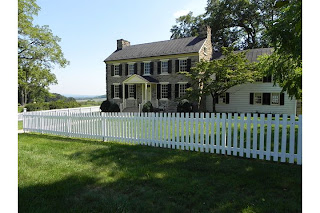 On Saturday, my wife and I headed down I-66 West and exited towards one of the Ranger's "safe houses," Mount Bleak.  Today, Mount Bleak is part of Sky Meadows State Park, and offers dramatic views of the surrounding mountains and countryside.  At the time of the Civil War, the home was owned by Abner and Mary Settle.  Incidentally, Abner's son pronounced John Brown dead when he was hanged in December 1859 after the raid on Harper's Ferry.  Mount Bleak was a frequent stop of Mosby's men, and several Rangers boarded in the house's attic.  The Rangers also erected a signal station on the high ground around Mount Bleak.

After leaving Sky Meadows, we checked into the Ashby Inn and headed out for a walking tour of Paris, which has many fine examples of early- to mid-19th century Virginia architecture.  The Ashby Inn itself was constructed in 1829 and served as a Methodist parsonage in the 1860s.  According to a handout from the inn, General Joseph E. Johnston and Jackson rested on the original porch on their way to First Manassas.  I am uncertain as to the veracity of this story, given that it appears Jackson was alone with his brigade when it entered Paris at two in the morning on July 19, 1861, and Johnston had already gone ahead to Piedmont Station to await the arrival of his entire Army of the Shenandoah. 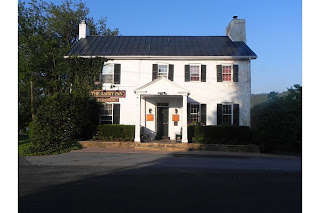 Further along Federal Street sits the home of Dr. Albin Payne. During 1864-65, this dwelling served as a "safe house" for one of Mosby's Rangers, Lewis Thornton Powell.  In January 1865, Powell disappeared, only to team up with John Wilkes Booth.  On April 14, 1865, the night of Lincoln's assassination, Powell, under the assumed name of Payne, attacked Secretary of State William Seward with a knife.  Seward lived, but Lewis Payne was captured and hanged on July 7, 1865. 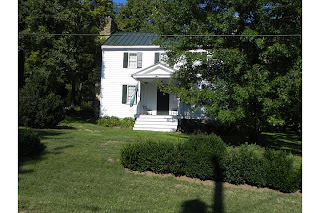 Closer to the inn, we checked out the so-called "Grove of White Oaks."  This area was the scene of political, social, and religious gatherings before the war. Jackson's soldiers camped in the fields among these trees on July 19, 1861 after crossing through Ashby's Gap and entering Paris. 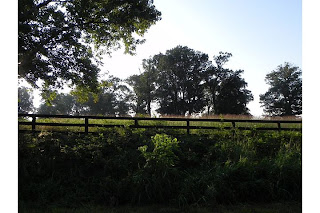 Turning down Republican Street, my wife and I examined the red-brick "Meeting House," which served as a school and church for both whites and blacks.  During the Civil War, the building was used as a hospital for Union and Confederate Armies. 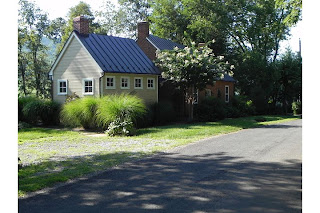 The "Meeting House," site of hospital for Union and Confederate troops, Republican Street

After a restful night's sleep and a delicious breakfast, we left Paris and headed down U.S. 50, known as the "John S. Mosby Highway" in this part of Virginia.  Our first stop was the tiny village of Rectortown, site of a few interesting episodes in Civil War history.  On November 7, 1862, Major General George McClellan, who had established his headquarters at Rectortown, was relieved here of command of the Army of the Potomac and replaced by Major General Ambrose Burnside.  The actual site of the event is not marked, but is commemorated by a Civil War Trails marker.

Rectortown, like everything in this part of Virginia, also has a connection to Mosby.  On November 6, 1864, Mosby had Union prisoners draw lots to determine who would be executed in retaliation for the killing of seven of Mosby's Rangers earlier that year, including six in Front Royal on September 23.  When a drummer boy drew one of the numbered tickets, Mosby allowed him to live and had a substitute selected by another draw.  In all, three of the seven were hanged, the others surviving or escaping.  Mosby wrote to General Philip Sheridan, Union commander in the Shenandoah Valley, and promised that henceforth, Mosby would treat Federal prisoners with "kindness due to their condition" unless Sheridan did otherwise to Confederates who were captured.  Sheridan responded favorably, and there were no repeats of the death lottery. 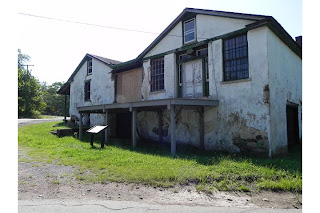 We made our way down to an old stone building in Rectortown.  During the war, this structure was used to house Union prisoners of war and still has traces of graffiti on the interior.  (Unfortunately, we were unable to enter and look around; probably just as good, considering the poor state of the building.)  I also walked over and checked out the railroad tracks alongside the prison.  Now the Norfolk Southern line, at the time of the Civil War, it was the Manassas Gap Railroad.  In October 1864, Mosby's Rangers disrupted Union plans to rebuild the railroad in an effort to supply General Sheridan's army in the Shenandoah Valley. 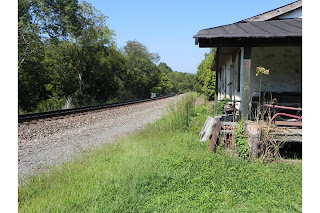 Manassas Gap Railroad line, next to old prison in Rectortown

Following the visit to Rectortown, my wife and I drove across a very rough, narrow country road and arrived at Atoka, which was known as Rector's Crossroads during the Civil War.  Here we stopped to look at the Rector House, where on June 10, 1863, the 43rd Battalion of Virginia Cavalry, known better as Mosby's Rangers, was officially organized.  Around two weeks later, Confederate General J.E.B. Stuart received orders here from General Robert E. Lee concerning the cavalry's route in the Gettysburg Campaign.  Stuart's actions in carrying out his order are controversial and the subject of much debate among historians to this day. 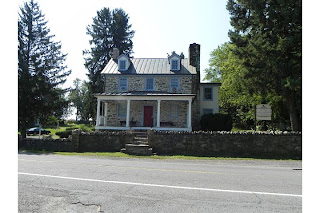 The Rector House in Atoka.  Mosby's Rangers was organized in the parlor, at the left front of the house. Note the historical marker to the right.

The Rector House is only open on Saturday's in the summer, so we were unable to view the inside.  My wife and I hopped in the SUV and headed next for Middleburg, capital of horse country.

Up Next: The remaining sites on our tour of Mosby's Confederacy, including Aldie Mill and Mt. Zion Church.
Posted by Ron Baumgarten at 7:40 PM

Mr. Baumgarten, Researching Mosby safe houses, I found your blog most interesting and very well done. If you like 'before and after' illustrations of CW sites in the Valley, contact me at the Parris Island Museum, Parris Island, S.C. 843/ 228 - 4280
Many of them are related to Mosby and his Rangers and there is great on near Bunker Hill, W.Va. Regards, Dana MacBean Museum Exhibit Coordinator

Thanks for your comment, and I am glad you liked the post. I would be most interested in the Mosby illustrations. And I'd like to check out your museum when I get down your way one of these days!