My recent post described part of the weekend trip my wife and I made to Mosby's Confederacy at the end of August.  As readers may remember, we stayed at the Ashby Inn in Paris, Virginia and toured the surrounding area, including Mount Bleak, Rectortown, and Atoka.  This post picks up where my wife and I left off--Middleburg, Virginia.  Because we had to get back to relieve the grandparents of babysitting duty, we only briefly stopped in Middleburg before heading to sites that I had a greater interest in seeing.

Middleburg, a quaint town along U.S 50, features many up-scale antique stores, galleries, and cafes catering to the hunt country crowd.  The place definitely has the feel of Georgetown in Loudoun County.  During the Civil War, Middleburg, like its smaller counterpart Paris, served as a rendez-vous point and place of entertainment for Mosby's Rangers.  On the night of June 17, 1863, Mosby met with General J.E.B. Stuart at the Red Fox Inn to share intelligence about the region. 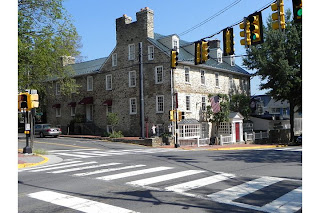 General Lee had ordered Stuart to interpose his force between  Lee's Army of Northern Virginia and the Army of the Potomac and to screen Lee's army as it moved northward, down the Shenandoah Valley and into Maryland.  Starting on June 17, 1863 at Aldie, and continuing through the 21st at Middleburg and Upperville, Stuart engaged the Federal cavalry under General Alfred Pleasonton.  Stuart succeeded in keeping the Union cavalry at bay, and Lee moved into Pennsylvania, where he clashed with Union troops at Gettysburg.

Although time did not permit a complete exploration of the sites that were part of the second largest cavalry battle in North America, my wife and I turned off onto the Snickersville Turnpike in Aldie to check out the monument to the 1st Massachusetts Cavalry. 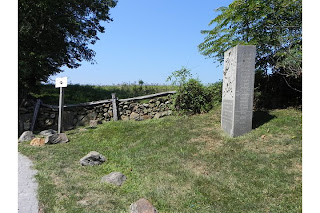 Monument to the 1st Massachusetts Cavalry and the stone wall where Virginia sharpshooters filed at the Massachusetts cavalrymen.  A historical marker next to the monument describes the action. 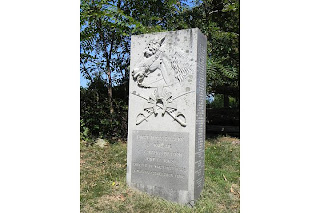 Detail of 1st Massachusetts Monument, erected in 1888.  This was the first monument to Union soldiers placed south of the Mason-Dixon Line after the Civil War.

On June 17, 1863, Stuart's cavalrymen engaged Pleasonton around Aldie.  The area along the Snickersville Turnpike where we were parked was the scene of the deadliest fighting.  Sharpshooters from the 2nd and 3rd Virginia fired from behind the stone wall next to where the monument is now located and drove back successive charges of the 1st Massachusetts Cavalry.  Only the arrival of the 1st Maine Cavalry put a stop to the carnage and drove back the Virginians.  The countryside is so serene and peaceful today that it is hard to imagine the bloodshed that took place here. 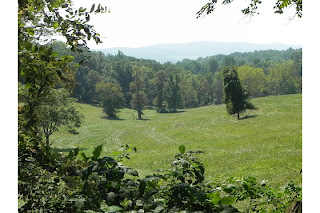 Part of the Aldie battlefield, across the Snickersville Turnpike from the monument and stone wall.  Note the Bull Run Mountains in the distance.

After taking in the battlefield, my wife and I headed back down U.S. 50 to Aldie Mill Historic Park, where we visited the old mill buildings constructed between 1807-16.  Before the Civil War, the mill's owner had opposed secession.  On March 2, 1863,  Mosby and sixteen Rangers attacked 59 troopers of the 1st Vermont Cavalry as they watered their horses at the mill.  Mosby succeeded in capturing nineteen of the Union soldiers.  As the guide at the mill told us, some of the troopers hid in the mill's flour bins and were covered in white, like ghosts, when Mosby captured them. 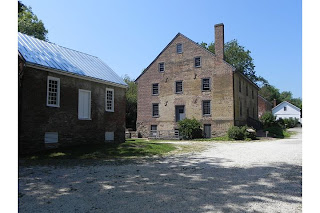 Aldie Mill, with country mill in foreground and merchant mill at back.

Our last stop before heading home was Mt. Zion Church, built in 1851.  The church was the scene of a skirmish on July 6, 1864 between Mosby's Rangers and a battalion of New York and Massachusetts cavalry under Major William Forbes.  Mosby had followed the battalion when it left Leesburg earlier in the day on a mission to track down Mosby.  The Rangers launched their attack on Forbes' men, who had paused near the church to water their horses and make coffee.  The Union troopers, overtaken by Mosby's men, were driven back to Mt. Zion Church.  In the end, the Union force lost fourteen killed, 37 wounded, and 55 captured of 150 men.  The church also served as a hospital during the war, and was used to imprison some of Mosby's civilian supporters in 1865. 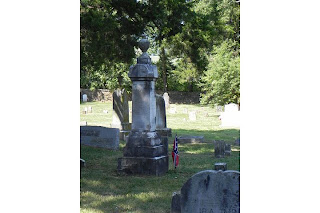 One of many Confederate graves in the cemetery at Mt. Zion Church.  The gate was closed, but I managed to snap a few photos over the fence.

Following the visit to the church, my wife and I continued down U.S. 50 on our way home.  As we left the tranquility of Virginia horse country and entered the suburban sprawl of Chantilly, I was glad to see that Mosby's Confederacy was so well preserved, but I also worried about the future. The DC metro area continues to spread even further west along U.S. 50 and I-66, transforming the rural character of the landscape.  Here's to hoping that the spirit of Mosby is able to fight off the next invasion.

Resources for planning your own trip:

I found a few resources invaluable as I put together my tour of Mosby's Confederacy.  The Historical Marker Database has entries on most, if not all, of the markers in that part of Virginia.  The entries provide exact locations for various markers and links to useful background information.

The Mosby Heritage Area Association has assembled a wealth of helpful resources on visiting the region, including driving tour brochures and audio tours.

I also purchased a copy of Mosby's Confederacy: A Guide to the Roads and Sites of Colonel John Singleton Mosby by Thomas J. Evans, James M. Moyer, and Virgil Carrington Jones.  This book, a comprehensive guide of Mosby's Confederacy, contains descriptions of so many sites that it will be difficult to choose which ones to visit.
Posted by Ron Baumgarten at 1:59 PM