Letter to the Editor: McLean and the Civil War 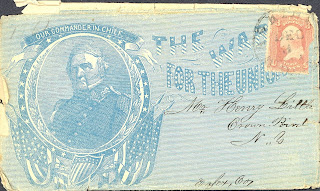 Recently I wrote a letter to the editor of the McLean Connection, my local community newpaper.  The letter ran in the September 1-7, 2010 edition of the paper. I thought readers might be interested in the sentiments that I expressed:

I am writing in regard to Alex McVeigh’s article [“The Story That Is McLean,” McLean Connection, Aug. 25-31] According to Mr. McVeigh, “McLean has seen its share of history.” The article jumps from President Madison’s flight to the establishment of a railroad [] that took tourists along the Potomac River.  However, the article neglects an important period of McLean history — the American Civil War — when Union and Confederate armies skirmished at Lewinsville and the Union Army established winter camps before the famous Peninsula Campaign in the spring of 1862. I notice the unfortunate oversight frequently whenever the history of McLean is discussed, whether in your paper or elsewhere. Fairfax County has erected a couple of markers, at Salona and Benvenue, that recognize the importance of our community in the early days of America’s civil conflict. Nevertheless, for some unknown reason, there is little to commemorate the Civil War era. This is a shame, particularly as we approach the 150th anniversary of the Civil War.

I have started a blog, “All Not So Quiet Along the Potomac” (http://dclawyeronthecivilwar.blogspot.com/) which seeks to shed some light on this forgotten history. I have discussed several aspects of the Civil War history of present-day McLean and intend to cover many other episodes from the 1860s. I invite you and other readers to take a look at the entries. I also hope that the McLean Connection will at some point feature the Civil War history of McLean, so that readers become familiar with this truly fascinating aspect of our history.


It really seems odd to me that discussions of McLean's Civil War past are so rare, particularly given the prominence of Civil War history in nearby communities like Fairfax and the Hunter Mill Road area. Perhaps this has something to do with the fact that McLean proper did not exist in the 19th century. Then again, President Madison's escape through the area happened long before the founding of McLean, and this event is often mentioned.  Perhaps the original residents of McLean chose to forget the earlier "occupation" by Union forces, and the collective amnesia ensured that newcomers didn't hear much about the war around here.  Whatever the reason, I am glad that I can use this blog to discuss interesting aspects of McLean's Civil War history, and I hope that my readers, wherever they are from, learn something about the lesser known events associated with the Civil War in Northern Virginia.  Of course, as I've told readers a few time before (here and here), I hope that we can get a few more markers installed to tell the whole story, but at least Fairfax County has started to take notice.
Posted by Ron Baumgarten at 4:49 PM