A couple of weeks ago, my wife and I took the boys to Old Town Alexandria.  As we were headed back to the SUV,  I stumbled upon another historic site related to the Civil War -- the birthplace of Brigadier General Montgomery Corse.  Unless you stroll down Prince Street, away from all of the shops on King Street, you would completely miss the Corse house.  I snapped a couple of photos and submitted the site to the Historical Marker Database.  My photos, and a brief write-up, can be found here.  The house is actually located a few hundred feet from the famous Confederate Monument on South Washington.  (See previous post here.) 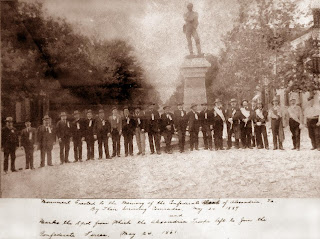 Veterans of the 17th Virginia Infantry at the dedication of the Confederate Monument at S. Washington and Prince Streets, Alexandria, 1889 (courtesy of the Fairfax Rifles)

Corse, a veteran of the Mexican War, rose to become commander of the famed 17th Virginia Infantry Regiment, which fought in most of the major battles in Virginia.  The 17th Virginia was comprised of companies from around Northern Virginia, including the Alexandria Riflemen and the Fairfax Rifles.  Corse was captured at the Battle of Sailor's Creek on April 6, 1865 and conveyed to Fort Warren prison in Boston.  After the war, he was a charter member of the R.E. Lee Chapter of the United Confederate Veterans.  Corse was a distinguished guest at the dedication of the Alexandria Confederate Monument in 1889.

You can always count on finding another Civil War site in Northern Virginia, just when you thought you had seen them all.
Posted by Ron Baumgarten at 6:26 AM