Who Were the Pennsylvanians at Langley?


As a native Pennsylvanian, I was very interested to discover that soldiers from Pennsylvania had encamped in the Langley area during the winter of 1861-62.  Readers may recall that I briefly discussed the Pennsylvania Reserve Volunteer Corps at Camp Pierpont in a previous post about the Civil War in present-day McLean.

In response to President Lincoln's call for volunteers to put down the rebellion in April 1861, Pennsylvania raised more regiments than the U.S. War Department would accept under the state's quota.  Governor Andrew Curtin was not willing to turn away the Pennsylvanians rushing to enlist.  In May 1861, he persuaded the Pennsylvania Legislature to authorize the organization of a "Reserve Volunteer Corps of the Commonwealth" to be armed and equipped from the state treasury.  Four training camps were established in the cities of Easton, Harrisburg, Pittsburgh, and West Chester.  George A. McCall, an 1822 graduate of West Point and decorated Mexican War veteran, was placed in command of the corps.  Notable future commanders would include John F. Reynolds, who rose to lead the First Corps of the Army of the Potomac, only to be killed at Gettysburg, and George G. Meade, Union commander of the Army of the Potomac from Gettysburg until the end of the war. 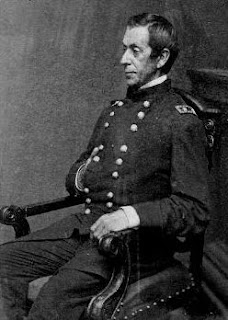 The Reserve Volunteer Corps consisted of thirteen regiments of infantry, including the famous Pennsylvania "Bucktails" of the 13th Pennsylvania Reserves, also known as the 1st Pennsylvania Rifles.  An artillery regiment and a cavalry regiment were also attached to the corps. The largest number of companies came from Philadelphia County and Allegheny County, where my hometown, Pittsburgh, is located.

A couple of regiments were initially sent to Western Virginia to join the forces of Colonel Lew Wallace.  Following the Union defeat at First Bull Run, the U.S. Government urgently called for additional troops, and requisitioned the Pennsylvania Reserve Volunteer Corps.  The corps was dispatched to Washington and quartered around Tennallytown (now Tenleytown).  On October 9, 1861, the corps, now a division of the Army of the Potomac, marched across Chain Bridge and established Camp Pierpont, around Langley.  Here the division trained and readied itself for the eventual movement on Richmond.  The third brigade under General E.O.C. Ord participated in the Union victory at Dranesville on December 20, 1861.  In the spring of 1862, the Reserve Volunteer Corps, now a division of the First Corps of the Army of the Potomac, marched to the Fredericksburg area. 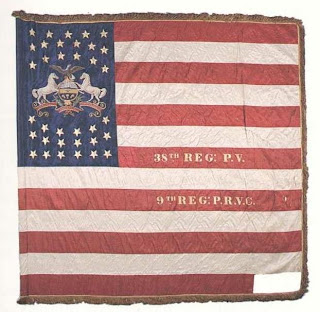 The Pennsylvania Reserve Volunteer Corps had an illustrious war record. During the Seven Days Battles on the Virginia Peninsula (June 25-July 1, 1862), it fought as part of the Fifth Corps. The division was next assigned to the Third Corps of the Army of Virgina during the August 1862 Second Bull Run Campaign, only to be re-assigned to the First Corps of the Army of the Potomac, where it fought at South Mountain, Antietam, and Fredericksburg. At Fredericksburg in December 1862, the division was instrumental in penetrating a portion of the Confederate line. The division was part of the Fifth Corps at Gettysburg, where it helped in the defense of the Union left flank and drove back the Confederates around Plum Run. When the three-year enlistment of the division's soldiers expired in 1864, many re-enlisted in other Pennsylvania regiments. 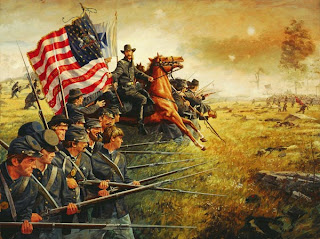 Posted by Ron Baumgarten at 8:22 AM