The 79th New York & Lewinsville: Fight for the Colors, Part I


The Battle of Lewinsville, more appropriately called a "skirmish," has given birth to some interesting stories about the early days of the Civil War around Washington.  The 1,800-man force sent to conduct reconnaissance at Lewinsville on September 11, 1861 consisted of soldiers from several regiments, including the 79th New York, under the command of Colonel Isaac Ingalls Stevens.  The 79th New York, formed as a militia company in 1859, was composed primarily of Scottish immigrants living on Manhattan Island.  The regiment was also known as the "Cameron Highlanders."  The original members of the 79th New York donned traditional Scottish kilts, while the newer recruits, who joined after the outbreak of hostilities, wore trews with a Cameron of Erracht tartan pattern.  These more stylized uniforms were soon replaced with standard issue uniforms. 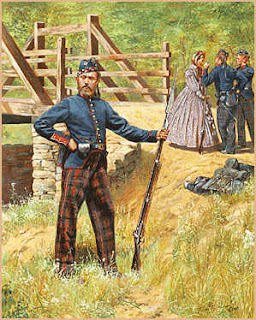 The 79th New York left for Washington in June 1861 and was assigned to a brigade under then-Colonel William T. Sherman, who would later make Georgia howl during the March to the Sea. The regiment suffered heavy casualties at First Bull Run on July 21, including its commander, Colonel James Cameron, who was killed during the fight. Bitter over the Federal defeat, and agitated at the prospect of having to serve their full three-year enlistment term, the soliders became increasingly angry and restless. Tempers flared even more when their new commander, Colonel Stevens, was chosen by appointment rather than by election.

Stevens ordered the 79th to move to a new camp on August 14, but the soldiers wanted nothing more to do with army life.  Eight companies disobeyed and refused to strike their tents.  General George McClellan, commanding the Army in and around Washington, learned of the disobedience of the 79th, and ordered General Andrew Porter, with Regular Army troops, to assist Stevens in putting down the mutiny at Camp Ewen near Meridian Hill in Washington.  Seeing the arrival of the Regulars, the rebellious troops backed down, and the 79th was marched off to the Provost Marshal's office, where it was forced to surrender the regimental colors.  Several of the ringleaders were arrested and sentenced to hard labor at the prison in the Dry Tortugas. 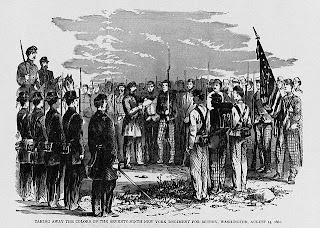 Taking away the colors of the 79th New York (Corbis Images)

Stevens set about disciplining and training his soldiers.  When the 79th marched through Washington toward another camp closer to Virginia in late August 1861, Stevens had the drummer beat the "dead march" to recall the regiment's disgrace and loss of the colors. At the start of September, the 79th crossed Chain Bridge to join General "Baldy' Smith's division.  It wouldn't be long before the 79th was given the chance to redeem its tarnished reputation.

Next up: The 79th New York under fire in Lewinsville.
Posted by Ron Baumgarten at 6:56 AM