Colonel John Singleton Mosby, the "Gray Ghost" of the Confederacy, is one of the most fascinating characters of the entire Civil War.  From 1863-65, Mosby led a regiment of mounted guerrillas known popularly as "Mosby's Rangers."  He and his men conducted daring raids, attacking Union supply lines, disrupting communications, taking prisoners, and seizing horses, food, and whatever else they could carry off. Mosby's reach extended far beyond his base in Loudoun and Fauquier Counties, Virginia.  One of his earliest and boldest exploits caused quite a bit of concern for soldiers stationed at Chain Bridge. 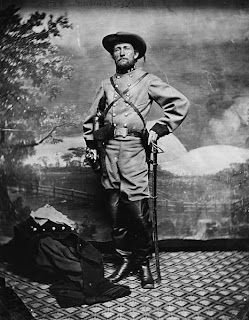 
On the night of March 8, 1863, Mosby and his men entered Fairfax Court House, which was behind Union lines.  Mosby intended to kidnap his nemesis, Colonel Percy Wyndham, a Brit who led a Federal cavalry brigade outside of Washington.  Although it turned out that Wyndham was spending the night in the capital, Mosby also had the chance to bag an even bigger prize, Brigadier General Edwin Stoughton, who was staying in the house of Dr. William Gunnell on the outskirts of Fairfax.  He entered the home with some of his raiders and captured the general, known as a heavy drinker and womanizer.  (In fact, Stoughton kept one of his romantic conquests in a tent outside the house!)  Early in the morning on March 9, Mosby and all of his men escaped unharmed, along with their take: Stoughton, two captains, 30 enlisted men, and 58 horses. 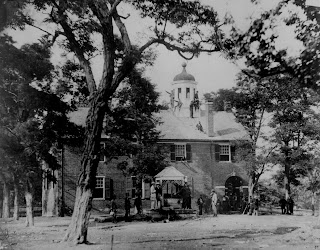 As to be expected, Mosby's raid had an immediate and discernible impact on the Union Army around Washington.  No one was sure who could be safe if a Confederate raider could ride undetected into a guarded, Union-occupied town and take a general as prisoner.  Soon the Federals around the capital began to fear that President Lincoln or members of his Cabinet might be Mosby's next target.  As a precaution, Union soldiers removed the planks from Chain Bridge each night.  This protective measure continued for weeks, until it appeared that the danger had passed.

Lincoln himself, however, seemed far from concerned that Mosby would dash across Chain Bridge, ride through Georgetown, and enter the White House on Pennsylvania Avenue.  He joked that he didn't mind the loss of a brigadier as much as the horses.  As Lincoln stated matter-of-factly, "I can make a much better General in five minutes, but the horses cost one hundred and twenty-five dollars apiece."

For an excellent account of these stories, as well as other Mosby exploits, check out Jeffry Wert's well-researched Mosby's Rangers.

Postscript: This upcoming weekend I will be taking an overnight trip to Mosby's Confederacy.  Stay tuned for a photographic essay of several of the sites out that way.
Posted by Ron Baumgarten at 7:00 PM