During my hunt for more information about the Civil War in Northern Virginia, I came across the website for the Hunter Mill Defense League (HMDL).  The Hunter Mill Road community is located near Oakton, Reston, and Vienna, Virginia.  According to the website, the HMDL "is a non-profit civic association that promotes the welfare of residents in one of Fairfax County, Virginia's most livable communities. It is the trusted source for information about land use, transportation, and environmental activities that specifically impact the 5,000 people who live along the historic 7.2 mile Hunter Mill Road. HMDL volunteers track issues, inform local residents, and advocate policies that preserve and enhance the scenic and historic character of the community."

Members of the HMDL have been active in publicizing and preserving the area's Civil War history.  The Hunter Mill Corridor changed hands ten times during the course of the Civil War.  The conflict had a major impact on the local civilian population, and tensions ran high between Union and Confederate sympathizers.  In 2009, the HMDL History Committee was instrumental in securing the placement of six historic markers, including one detailing the encampments of Union and Confederate troops who passed through the Hunter Mill Corridor during the Antietam and Gettysburg campaigns and another about the March 1862 camp of the Pennsylvania Reserve Corps.  The HMDL offers bus tours of Civil War sites along the Hunter Mill Corridor and has produced Danger Between the Lines, a Civil War documentary about the area, and a related guidebook.  Further information can be found on the HMDL website. 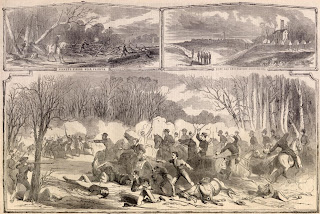 I couldn't resist purchasing the DVD, which I watched one night when my wife was safely asleep!  The documentary tells the dramatic story of the Civil War along the Hunter Mill Corridor.  Period sketches and photographs accompany the well-written narrative. The film also features authentic renditions of Civil War-era music from the 2nd South Carolina String Band.  (The music was so appealing I went out and bought a CD by the band.)  Anyone interested in Civil War history in Northern Virginia should check out Danger Between the Lines.  And based on my recent post about documentaries, the History Channel could learn a thing or two from the producers.

I really appreciate the work of groups such as the HMDL, who strive to stop commercial development and sprawl and preserve the historic and scenic character of the outer suburbs. I am looking forward to taking a Civil War tour of the area this autumn and will be sure to report back with photos and more details about the corridor's history.

Thank you for the nice comments about our work highlighting Civil War history in the Hunter Mill Road Corridor. BTW our documentary "Danger Between the Lines" was shown on WETA, Channel 26 last September. We are going to be the guest speakers at the Great Falls Historical Society meeting on September 8. We will show some of the documentary and will have artifacts that were found in the Hunter Mill area.

Thanks for your comment, and welcome to the blog.

I didn't know about WETA showing the documentary, but it doesn't surprise me that they did! I certainly hope readers will check it out, either at the Great Falls event, or by getting a copy from your website.

The Great Falls Historical Society event sounds interesting. I'd like to see the artifacts from the Hunter Mill area if I get a chance to stop by.

Ron: We got to get you out for a tour and/or some private time someday. I'm Bob's neighbor and the one who conducts the tours. I can get as deep as you'd like and have just finished another booklet entitled "Forgotten Roads of the Hunter Mill Road Corridor." Started out trying to locate the roads in the corridor that were noted on the 1862 McDowell Map and was so successful that we ended up expanding the scope of the project from mid-1700s when Fairfax County was formed up to the present = approx. 250 yrs. Let us know when/how you'd like to pursue a bit more of the history. Think you'll find it fascinating. Jim Lewis

Thanks for your comment. I will be in touch about the touring. It would be great to learn more about the old roads in the area and to visit the Civil War sites mentioned in the documentary. I also look forward to the publication of your booklet.