What Music of the '60s Tells Us


I have been listening to my CD from the 2nd South Carolina String Band on the way to and from work.  Nothing like hearing Jine the Cavalry as you are crossing the Potomac.  I am always struck at how some of the songs could have come from the folk tradition of the Vietnam War era -- think Peter, Paul, and Mary or Pete Seeger, who actually covered a few Civil War songs that I have downloaded on my iPod.  The final verse and chorus from The Vacant Chair, for example, laments:

True they tell us wreaths of glory
Ever more will deck his brow,
But this soothes the anguish only
Sweeping o’er our heartstrings now.
Sleep today, O early fallen,
In thy green and narrow bed,
Dirges from the pine and cypress,
Mingle with the tears we shed.

We shall meet, but we shall miss him.
There will be one vacant chair.
We shall linger to caress him
While we breathe our ev'ning prayer. 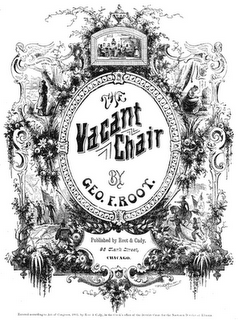 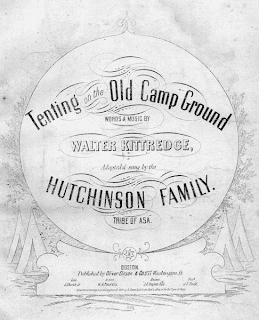 Sheet Music, Tenting on the Old Campground (courtesy of Wikipedia)

Or, take the chorus from Tenting on the Old Campground:

When we think of Civil War songs, we often recall rousing patriotic tunes like Battle Cry of Freedom, or humorous numbers like Goober Peas.  But sentimental ballads, with anti-war overtones, were equally as popular among the soldiers.  In fact, as Bruce Catton relates in Mr. Lincoln's Army, some commanding Union officer in the Army of the Potomac banned the singing of When This Cruel War is Over out of concern that it would negatively affect morale in the ranks and lead to desertion.  The popularity of such songs tells us that although soldiers may have been motivated to fight out of a sense of duty, honor, and patriotism, they recognized that war was a violent and terrible experience, and that the sooner they could bring it to a close, the better.  I can't help but listen to these songs and think how the soldiers used them to express sentiments that may have otherwise gone unspoken out of adherence to Victorian notions of bravery and manhood.  These songs, speaking to us from the past, remove the romantic gloss from our remembrance of the Civil War, and capture the sense of loss and the longing for an end to the violence that many soldiers must surely have felt.
Posted by Ron Baumgarten at 10:45 AM

Email ThisBlogThis!Share to TwitterShare to FacebookShare to Pinterest
Labels: Music

This is fascinating to me as a musician, Ron. I will have to check out some of these recordings. Since this is a post about Civil War music, I have to add in about my favorite American composer, Charles Ives. He was greatly influenced by his father, George Ives, who had been a bandleader during the Civil War as a teenager, very highly respected. He continued to play much of that music and his son Charles, born in 1874, grew up hearing those songs and incorporated many of those tunes in his compositions. I could go on for hours here, but here is a little bit about father and son http://www.musicweb-international.com/Ives/04_Biography.htm

I thought you might like the musical angle! You should check out the 2nd South Carolina String Band; I think you'd enjoy their faithful renditions. They cover a lot of the "pop" music from that time (e.g.,Stephen Foster). All good fun.

I have to confess that I did not know Ives. Thanks for sharing. I will have to check him out soon!

My favorite song is "Hard Times", which was written by Stephen Foster around 1860. We use that haunting song at the end of our documentary. When we have shown the video at events, we have heard people in the audience begin to softly sing along and it has also brought people to tears. In April 2008 my wife and I took a trip to Ireland and one afternoon the coach driver put on a CD of Irish music and the second song was "Hard Times". It was certainly fitting for all the hard times the Irish have faced over the past two or three centuries.

That last song on the documentary was indeed haunting, and I remember being struck by it. I didn't get the CD that had "Hard Times" on it, but need to do so. I like a lot of the old Irish songs that found their way into the Civil War, along with the mountain music like "Cumberland Gap."