Today I took the family to Colvin Run Mill Historic Site run by the Fairfax County Park Authority.  The site is located along what used to be an old wagon road connecting Alexandria to the Shenandoah Valley.  This road was used by the British in 1755 on their way to capture Fort Duquesne (the site of present-day Pittsburgh).  George Washington originally owned the land and intended to build a mill there, but his plans were overtaken by other, well-known events.  In 1811, William Sheppard finally built a mill along Colvin Run and sold it to Philip Carter from Frederick County, Maryland. 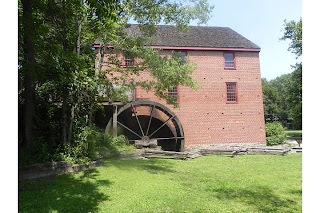 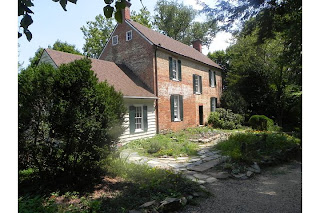 Readers might be wondering what all of this has to do with the Civil War.  Not surprisingly, I dug a little deeper and discovered that during the War of the Rebellion, the mill was owned by John Powell, who bought the property in 1842 and held it throughout the Civil War.  The war devastated local farming in Fairfax County.  This downturn in agricultural activity severely impacted the mill, which used grain from local farmers to make flour.  Powell's business never recovered, and in 1872 he filed for bankruptcy.  The mill was on the market until 1883, when purchased by the Millard family from Maryland.  This story just goes to show that no aspect of civilian life in Fairfax County was left untouched by the Civil War.
Posted by Ron Baumgarten at 6:15 PM

Nice, Ron--you found a Pittsburgh angle! But seriously, I just had a chance to read over all of your blogs today. I'd read some before, but had not gotten to many. You know I'm interested in local history, so I enjoyed your postings very much. I would think the McLean Historical Society would want to link to your site! Thanks again; I learned a lot!

Yes, always looking for the hometown angle! I will have a few more in upcoming posts, too. Glad you are enjoying the posts and learning something new. Not sure if MHS has a website, but I need to get in contact with them, particularly with respect to the marker project.

Ron, the old road bed, as it ran during the Civil War, differed greatly from the current VA 7. Yet it may still be traced today. The old mill saw the passing of many columns, to include a rather large portion of the AOP on their way to Edwards Ferry in June 1863.

Interesting. I also just read tonight that General Ord left a portion of his force at the mill on the way to Dranesville in December 1861. I need to verify that fact, as it was on a Wikipedia entry. By the way, there was a state historical marker on the Colvin Run site concerning the old wagon road, which according to the marker is now Colvin Run Road. This marker discussed the 1755 movement of General Braddock's force, mentioned in my post. I assume this road may have some relation to what was to become the Leesburg and Alexandria Turnpike, but I am unsure. In any event, I don't know if you have the marker on the HMDB. If not, I'd be happy to submit!

The marker on the Colvin Run Mill Historic Site was entered on the Historical Marker Database in 2007. Here is the link: