Historic Blenheim: The Writing is on the Wall


This past spring I visited the Civil War Interpretive Center at Historic Blenheim in the City of Fairfax.  I arrived a little before a lecutre on the Civil War defenses of Washington and had the opportunity to tour the historic Blenheim house and grounds.  Blenheim, a red brick farmhouse constructed in 1859 and owned by the Willcoxon family during the war, "is nationally significant for the more than 100 signatures, art and poetry created by Union soldiers during their occupation of the Fairfax Court House area in 1862-63. The house contains one of the most voluminous and best-preserved examples of Civil War inscriptions in the nation, a 'diary on walls' providing insight into typical soldier life during the Civil War." (City of Fairfax website description)  Most of these wall writings were on the second floor and attic, which were closed for structural safety issues, so I only had a chance to view those on the first floor, which were less dramatic and fewer in number.  Lucky for me, the Civil War Interpretive Center had constructed a full-size replica of 2/3 of the house's attic, complete with the soldiers' graffiti.  The center provides information on the soldiers stationed at Blenheim and examines the meaning of the wall etchings.  Behind Blenheim house sits "Grandma's Cottage," a residence built in the 1830s or 1840s, which was  home to the daughter of the estate's owner.  The cottage was not originally located on the Blenheim estate, but was moved there from another location in Fairfax County. 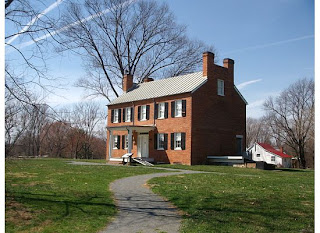 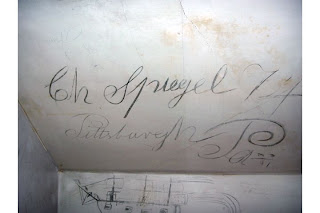 Reproduction of wall inscriptions and pictographs in the Interpretive Center.  I liked this particular signature of a Union soldier from my hometown of Pittsburgh, Christian Spiegel of the 74th Pennsylvania.  Note also the sketch of a ship. 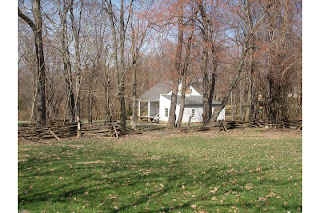 Since 1998, the names of 115 soldiers inscribed on the walls at Blenheim have been identified.  They represent 23 Union regiments from Massachusetts, Michigan, New Jersey, New York, Pennsylvania, West Virginia, and Wisconsin.  There were three distinct periods of the Federal presence at Blenheim.  In Spring 1862, as soliders passed through Fairfax Court House on their way to the Peninsula Campaign or the Shenandoah Valley, they left their mark on the walls of Blenheim.  Starting in September 1862, Union troops of Major General Franz Sigel's 11th Corps, consisting of many German-Americans, occupied Fairfax Court House.  Blenheim served until January 1863 as a reserve hospital for the corps.  These patients also wrote and drew on Blenheim's walls. Finally, in spring of 1863, the 1st Michigan Cavalry, the 1st West Virginia Cavalry, and the 18th Pennsylvania Cavalry from the 22nd Corps patrolled the area around Fairfax Court House and left behind graffiti at Blenheim.

I encourage local residents and visitors to the Washington, DC area to check out Blenheim. This lesser-known site provides an interesting glimpse into the life and times of Union soldiers in and around the City of Fairfax.
Posted by Ron Baumgarten at 4:21 PM