While recently touring the site where Mosby's Rangers were officially organized in 1863, I encountered a fellow visitor and his wife.  The gentleman asked me if I was a Civil War buff, to which I enthusiastically responded "Yes."  I then asked him the same question.  He hesitated, and then replied, "Sort of," before expressing his disgust with the hero worship directed towards Colonel Mosby.   To this man, Mosby was nothing more than a bandit, and his Rangers took the coward's way out, unlike his great grandfather, who had shouldered a musket and marched off to war as a member of the 5th Alabama.

This man got me thinking.  Are Mosby and his Rangers worthy of admiration?  There is certainly a tendency to romanticize their wartime adventures.  The very idea of taking a general hostage in his own bedroom is the stuff of legend.  (See here.)  And there is something incredible about a handful of mounted men being able to outsmart far superior numbers.  (See here.)  But was Mosby a legitimate military figure, or a common criminal in cavalryman's clothing?

Mosby's irregular brand of warfare was an important component of the Confederacy's military operations in the Eastern theater of war.  Mosby and his troopers disrupted the rear of the Union Army, seized valuable supplies and ammunition, took prisoners, and forced Washington to divert resources in an effort to eliminate the threat to men and materiel.  Mosby's value to the war effort was recognized by no less a general than Robert E. Lee.  In fact, when the Confederacy repealed the Partisan Ranger Act, largely at Lee's urging, Mosby's command was exempted along with one other group. 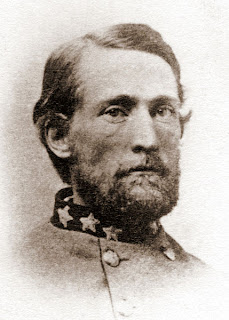 
In my mind, I've always made a distinction between Mosby and other guerrilla leaders, such as William Quantrill.  For the most part, Mosby enforced discipline on his ranks and avoided large-scale bloodshed and retribution killings, such as Quantrill's massacre at Lawrence, Kansas in 1863.  This is not to say that Mosby's men always had clean hands.  For example, Mosby ordered a retaliatory execution after several of his Rangers were killed by Federal troops under General Philip Sheridan.  (See here.)   Mosby's men also took livestock, horses, and crops from Quakers and Union sympathizers in Loudoun County.   There is no denying, however, that Mosby was an exceptional military leader, skilled in the ways of irregular warfare.  For this, he is certainly worthy of the admiration that many have accorded him.  As Jeffry Wert concluded in his book Mosby's Rangers, Mosby and his men have "earned a place among some of the finest guerrilla warriors in history."
Posted by Ron Baumgarten at 8:34 AM