Music of the 79th New York


A couple of months ago I wrote a few posts on the story of the 79th New York Volunteer Infantry in the skirmish at Lewinsville.  (See here and here.)  Imagine my surprise when reading the December edition of Civil War Times I came across a review of Kilted Warriors, a recording of music of the 79th New York.  I immediately ordered the CD on Amazon, which came with an informative 22-page booklet. 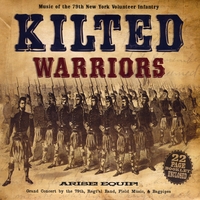 Caywood Jones, Andy Redmond, Robert Philbin and a host of others perform music of the 79th on authentic period instruments.  They cover a wide variety of tunes, including regulation field music, popular songs of the Civil War era, Scottish military marches, and traditional Celtic airs.  The CD is certainly unique.  It is not everyday that modern listeners can hear martial bagpipe music associated with a Civil War regiment which itself was so unique. (Incidentally, the booklet notes that "there is, of yet, no evidence to link the pipers with the official muster rolls," although pipers were likely used in parades by the pre-war 79th militia unit.)  Particularly stirring is the lyric poem written for the 79th that leads off the CD.  "Field Music Under Fire" replicates what drum and bugle sounded like in battle, complete with musket and canon fire.  And the musicians perform an interesting rendition of the 19th-century favorite "Old Dan Tucker" on fife and drum.

This recording may not suit all musical tastes.  But I certainly find it a rousing, and sometimes reflective, way to start my morning commute.  Not more than a few times have I felt a chill as I listened and drove down the very road that the 79th once marched over on the way to battle.

Posted by Ron Baumgarten at 9:05 AM

Thanks for the tip. Have you heard the David Kincaid recordings? His discs almost make you forget you're listening to period music. Very well done.

I haven't heard of them, but just checked the webpage. Looks like some good stuff. Thanks for the tip as well!

With your morning commute? Heh.

I did a fair amount of research on the 79th Cameron Highlanders for my battle novel "Knoxville 1863". They had a band which marched with them through the streets of NYC and, once they were off the trains, down Pennsylvania Avenue past President Lincoln on the front steps of the White House.

They were, perhaps uniquely, provided such things as kilts, trews, and glengarry bonnets for ceremonial occasions by the Caledonia Society of NYC. They undoubtedly had drums and bugles at Knoxville and probably even a fifer or two. But, alas, no piper. Unfortunately as, on that occasion, they could easily have found a Reb or two to pay him.

Gotta listen to something when it takes 45 minutes to go nine miles around here! Of course, maybe martial music isn't the best when dealing with DC drivers!

I hadn't yet followed the story of the 79th NY once they left Northern Virginia. Interesting to see they were at Knoxville. Thanks for the info.