The Civil War at Oakwood-Ridgewood Elementary


Recently I started to think about my early Civil War education in fifth grade at Oakwood-Ridgewood Elementary School near Pittsburgh.  By the time I reached fifth grade in 1981, I had already been a "buff" for a couple of years.  My family even gave in to their young son's pleas to visit Gettysburg during the previous summer.

It probably is safe to say that I entered the classroom with more knowledge of the Civil War than a lot of fifth graders across the country, with the exception of Southern boys and girls who were raised on tales of the Lost Cause!  Of course, I still didn't know that much.  I guess you could say that I was young and impressionable.

What I find most fascinating after all these years is the relatively over-simplified and pro-Southern view I remember learning.  Some of this makes sense, given that we were fifth graders, and not history grad students.  But it doesn't explain why the Southern side seemed to figure so prominently in my education, particularly at a Northern school.  We were taught that the cause of the Civil War was states' rights; that Southern society was characterized by chivalry and honor; that Southern men were skilled horsemen and marksmen, and even better fighters; and that the South had the best generals.  Our teacher even entertained us by reading aloud from a book about a young soldier with Confederate General Wade Hampton's Legion.  A romanticized and sanitized version stuck with me for many years.  It was as if the Lost Cause had found its way across the Mason-Dixon line.  (In some ways it already had, looking at the early 80s popularity of the Dukes of Hazard and "The General Lee," with its Confederate flag and Dixie-tooting horn.) 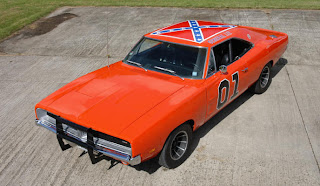 Perhaps my memory is faulty.  After all, back in those days, I admired the Southern generals, whose dash and daring appealed to this boy's sense of adventure and imagination.  Maybe I liked rooting for the underdog, since I myself was sometimes picked on by the schoolyard bullies.  If I remember learning the Confederate side of things, it might just be my selective memory.  However, I can't help but think that this Catholic boy would have felt more guilt if I had learned the whole truth and continued to cheer for the Rebels.  Now, all these years later, my adult mind views the war and its causes quite differently, although I have to confess to still admiring the military skills of Lee and other Southern generals. 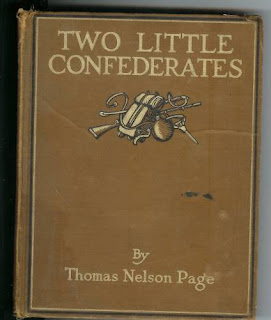 One of my childhood books. I remember reading this on my grandparents' front porch one summer.

I'd like to think that public schools are beyond teaching a view of the "War Between the States" that glosses over the hard issues.  I don't yet have kids in school, but I hope that they would learn a balanced, fair, and complete picture of the war, including a frank discussion of slavery and race, even in the fifth grade.   We can still teach that Lee was a brilliant general and that country boys from Dixie were better horsemen, but we can't forget to teach the truth about the system they fought to preserve and the threat that the Confederacy posed to our Constitution and our Union.
Posted by Ron Baumgarten at 8:55 AM

Email ThisBlogThis!Share to TwitterShare to FacebookShare to Pinterest
Labels: Lost Cause, Memory

How interesting, Ron! Really. I didn't get a whole lot of Civil War history in my Catholic elementary school, but my hometown is a half hour drive from Gettysburg, Civil War history lived and continues to live in Westminster, MD. A great book came out with its Civil War history, "Just South of Gettysburg," my parents still have their copy from 1963. All I grew up hearing was "brother against brother," that was very common in the area.

I didn't realize you grew up that close to Gettysburg. No wonder you enjoy Civil War history so much! In Pittsburgh, we are surrounded by French & Indian War history, yet I don't recall too much focus on that subject in American history classes.

I'd like to get a copy of the book you mention. Now I need to add your hometown to the regional sites that I should check out! The list is never-ending!

Yes, the big Civil War event in Westminster - Corbit's Charge, which happened right in front of a Sheetz gas station and convenience store, my sister and I always laugh about that. Anyway, here's a link
http://www.hmdb.org/marker.asp?marker=13832

That is interesting. I just bought a book on the cavalry during the Gettysburg campaign. I will have to look up this fight. Wonder what Corbit and Stuart would have thought of the Sheetz? At least they could have gotten some Slim Jims to feed the horses....

Hi Ron, I found it startling that you were taught a romanticized, pro-southern view of the Civil War in Pittsburgh. I wonder if it was a function of the particular teacher you had. My sense is that nowadays teachers have less leeway (no pun intended) than they did 20-30 years ago. I can't imagine the same happening today anywhere in the north or even in much of the "new" south, like northern Virginia, thankfully. Ken.

Yes, I was wondering myself if my teacher had some sort of Southern connection. Of course, as I point out in the post, I may have some degree of selective memory about it all.

I think that in general, the Civil War was much more romanticized when we were growing up than it is nowadays. There are things that would fly back then that never would get under the radar screen today without some sort of controversy.

On a related note, check out this recent post from the Civil War Memory blog:

In particular, Kevin Levin describes a text book used in Virginia into the 1970s and provides a couple of links:

I suppose it is not surprising that I could have learned about the Civil War the way I did back in 1981 in light of this information!

"...but we can't forget to teach the truth about the system they fought to preserve and the threat that the Confederacy posed to our Constitution and our Union."

Yes, a terrible thing if the Union were truly a voluntary association; much beter that it be enforced at the point of a gun.